The Wolf of Wall Street
By: Blake Crane

Here's to me.
Buy It From Amazon
Buy It On DVD
Buy It On Blu-Ray
Buy The Book

Oh look, another corruption-of-the-American-Dream film capitalizing on recent turbulent times and throwing around phrases like “top 1 percent.”  Not quite. This one’s directed by Martin Scorsese with astonishing gusto, presenting the greed and hedonism of its subjects in ways that shock, appall, and, chiefly, amuse. The celebrated septuagenarian director proves he hasn’t lost his edge with The Wolf of Wall Street, an exceedingly entertaining opus chronicling a voracious stockbroker’s meteoric rise and eventual fall. In the grand scheme of things though, it’s more like a stumble.

Jordan Belfort (a tour de force – or, farce – turn by Leonardo DiCaprio) arrives on Wall Street as an earnest, naive go-getter thrilled with his job at an established brokerage. He quickly learns the ropes from Mark Hanna (Matthew McConaughey in a joyous but brief appearance), who informs the youngster that drugs and self-pleasure are the keys to success in the financial racket. The rest is just a magic act that moves money from a client’s pocket into your own.

Out of a job after Black Monday, Belfort catches on at a sleepy penny stock firm, and, motivated by the insane commissions, uses his suave salesmanship to hock garbage stocks for huge personal profit. Belfort then forms Stratton Oakmont with a motley crew of characters and arms them with a detailed sales script that persuades their marks to buy, buy, buy. Estates in Greenwich, helicopters, yachts, Lamborghinis – along with drugs, hookers, and every excess – follow.

It’s a fantasyland that Scorsese and DiCaprio indulge in with glee, with no pesky moralizing gumming up the debauchery. There’s no peek into the lives ruined by Stratton Oakmont, only the spoils enjoyed by Belfort and his cohorts, including a remarkably wacky Jonah Hill as faithful right hand man Donnie Azoff. In direct addresses to the camera, whenever Jordan senses he’s getting too detailed in the explanation of his schemes, he stops to snort a line of coke or throw a 100-dollar bill into the garbage. The details don’t matter; all that matters is this utopia he’s created for himself. Within the whimsy Scorsese and screenwriter Terence Winter invoke several other cinematic worlds; references to Willy Wonka, Bond villains, and many more larger-than-real-life characters perpetuate an illusory humanity. At one point Belfort and Azoff pound a conference room table and recite the “one of us” chant from Tod Browning’s Freaks. Are these shallow swindlers really 1930’s cinema devotees?

A few accomplished film directors have small supporting roles here: Rob Reiner as Belfort’s combustible father, Jon Favreau as a lawyer, and Spike Jonze as a regular-guy boss at the penny stock firm. Each of the advisory characters provides sound guidance that Belfort either ignores or bastardizes to get more of what he wants. A rousing speech to his underlings is given in front of a whiteboard with the name Altman written on top. What all of this means I don’t exactly know, but it’s not an accident. Perhaps Scorsese is trying to imprint the notion of Belfort’s unregulated chicanery on our subconscious, or maybe he’s just having fun with his colleagues. Either way, it works.

The lewd and lascivious acts are impossible to document and must be seen to be believed, if they can be believed at all. Just when you think things can’t get crazier, an in-flight orgy, drunken helicopter piloting, a thorough explanation of hookers and their dollar value, and much, much more come along to deepen the depravity. The extremely hard R-rated spice is an unrelenting barrage that barely pauses for annoying SEC inquiries, FBI investigations, or domestic foibles. Belfort sees the probe by everyman FBI agent (Kyle Chandler) and arguments with his trophy wife (Margot Robbie, who does a lot with a mostly thankless role) as minor speed bumps in his Quaalude-fueled existence.

Scorsese and DiCaprio have us laughing at the antics of these philandering, drug-addicted criminals for three hours, never passing judgment and never deliberately reminding us that these real-life philandering, drug addicted criminals were living the high life on our dime. After all, what will moralizing accomplish? In order to muzzle the wolf, the sheep have to figure out on their own how not to get fleeced. A couple years in a resort-like federal prison certainly won’t teach any lessons. In this twisted financial world, crime doesn’t only pay for Belfort, it’s the gift that keeps on giving as long as there are suckers willing to part with cash in futile hopes of bettering their lives. It’s a scary proposition, but just because The Wolf of Wall Street is hilarious doesn’t mean it’s not terrifying. 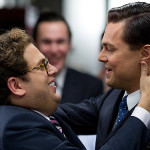 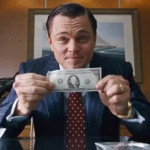 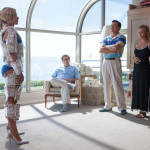 8 thoughts on “The Wolf of Wall Street”