Wish I Was Here
By: Matthew O'Connell

Slo-mo walking shot: check.
Buy It From Amazon
Buy It On DVD
Buy It On Blu-Ray

Zach Braff’s second feature film from the director’s chair is as ambitious as his first. Wish I Was Here attempts to extract meaning and cull wisdom from one of the more traumatic and significant events in the lifecycle: the death of a parent. The story is loaded with emotion and significant moments — maybe too much for its own good — but it’s as successful as any film at translating personal struggles into profound breakthroughs.

Removing the patriarch is perhaps the most direct and relatable narrative device one can use to force an unaccountable individual to become a full-blown, self-reliant person. There’s no longer a safety net between him and the void, and the end has become that much more real and inevitable. That’s where we find Aidan (Zach Braff) and his brother Noah (Josh Gad), who seem content to crack wise and remain oblivious to life’s larger concerns until their father’s cancer returns with a terminal diagnosis.

Unfortunately, Aidan is yet another struggling actor who doesn’t want to give up on his dream. Thankfully, Aidan’s profession and outlook are thematically sound, supporting the needs of the story rather than reflecting the Hollywood bubble where the story was developed. And Noah is an Internet troll, causing trouble from a safe distance and refusing to take on any real responsibility. Aidan and Noah fondly recall playing when they were kids — like we all do — but as thirtysomethings, they haven’t yet given up their tendency to pretend, despite the “real world” creeping in. Aidan’s embodiment of pretending is his acting career, and with Noah it’s the behind-the-curtain identity he assumes through the Internet, and the literal dress-up he plays when he attends Comic-Con in cosplay. 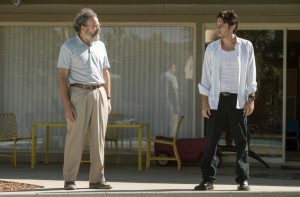 Can I be in your fortysomethings movie too?

In Gabe (Mandy Patinkin), we’re given another cliché: the stern, old-fashioned, outdated, flawed father figure who has turned one of his sons (Noah) against him and seeks to make deathbed amends. There’s no real reason for the father-son animosity, other than that it was necessary for a dramatic arc. It all sounds quite traditional, but the understated vulnerability in Patinkin’s performance elevates the archetype. Patinkin is the soul and anchor of the film, composing a dense core for the others to circle around by latching onto his gravity. Even Braff’s patented soulful-indie-movie-thousand-yard-stares take on significant meaning in Patinkin’s presence.

As Gabe’s health declines, each family member faces his or her fears in turn. And naturally, the familial crisis breaks down the barriers for other emotional events. It leads the clan to seek to understand more about the fundamental human quagmires of what their lives mean and what happiness and fulfillment look like to them. The inevitable elephant-in-the-room is mortality, and how we all face it differently.

Above all, Braff deserves praise for his earnestness. Skilled at character development and seemingly unconcerned with anything besides telling a personal, powerful, sincere story, he pulls together a strong piece. It suffers a bit from its epic ambition, tripping over itself as it attempts to inject meaning into every crevice. Viewers can only take so much personal discovery before we need a rest, and the breaks in tension are too far in between. Ironically, it might have packed more wallop if it pulled a few of its punches.

Wish I Was Here praises the value of showing up. Its characters must accept that fantasy lies in one world, and we live in another (ours is the “real” one). They must grasp that while we didn’t grow up to be heroes, we may still be brave. Courage comes in many forms, and coming to terms with whom you are is no small dragon to slay. The film goes to great lengths to acknowledge the courage of simply facing fear — putting less emphasis on the outcome, and more on the intent. This allegory for life is aptly woven into the film.

Not everyone will buy into Braff’s deeper-than-thou soul-searching, nor will everyone appreciate the excessive sentimentality. But those who find him to be sincere will enjoy the journey, and maybe shed a few tears along the way.