Over the Top 2?
Buy It From Amazon
Buy It On DVD
Buy It On Blu-Ray

Once upon a time, Jennifer Hudson stood on a soundstage and was told by Ryan Seacrest that she would not be the next American Idol. For most people, this kind of thing is a one-way ticket back to obscurity. Something different was in the cards for Hudson, though. It turned out she was perfect for the role of Effie in Bill Condon’s film adaptation of Dreamgirls. Hollywood agreed, awarding her a Best Supporting Actress Oscar. Other acting roles followed, as did hit records. Winnie Mandela offers Hudson something highly prized in the acting world: the chance to play a well-known person in a big screen biopic. The actress proves more than up to the challenge. The movie, unfortunately, lets her down.

A brief introductory segment gives us some background on Nomzamo Winfreda Madikizela, the South African daughter of a teacher who hoped she would be a boy. Winnie spends years trying to earn his approval. As a tough, determined young woman (now played by Hudson), she meets lawyer/anti-Apartheid activist Nelson Mandela (Terrence Howard). They get married and have children. When he is arrested and sentenced to life in prison, Winnie carries on with his cause. She, too, spends time in jail, after which her stance becomes angrier, more openly combative. What she preaches begins to move away from the peaceful activism promoted by her husband and culminates in the Mandela United Football scandal, in which she is indicted for the kidnapping and murder of a 14-year-old boy she suspects of being a traitor. The movie suggests that Winnie and Nelson had a deep, abiding love that held fast throughout their ordeals, but that his incarceration was so heartbreaking that her moral compass became recalibrated in the wrong way.

Winnie Mandela makes a mistake common to biopics: rather than focusing on one specific part of her life, it wants to cover absolutely everything. As a result, the film is very shallow, never going into much depth on anything. Winnie’s motivations, especially in her later years, as she drifts away from the ideals her husband so firmly believed would bring positive change, are hazy and unclear. Director/co-writer Darrell Roodt dramatizes all the things that happened to her, yet fails to find a way to depict the psychological rationalizations that reshaped the approach of her activism. As such, Winnie Mandela often feels like a CliffsNotes version of her life, hitting the high points without creating a larger context for them. Newspaper headlines and newscaster voiceover are utilized as connective tissue, but these things only emphasize just how disjointed and patched together the film really is.

Compounding that problem is the oversimplification of Apartheid. One character, a racist government bureaucrat named Colonel de Vries (Elias Koteas), is assigned to represent the entirety of it. He keeps popping up to sneer angrily and make trouble for Winnie and Nelson. This sloppy depiction makes it seem as though the Mandelas were oppressed not by a prejudiced political system but rather by one white South African Snidely Whiplash.

That Winnie Mandela flubs the drama so badly is a shame, because the two leads are quite good. Terrence Howard captures the stately eloquence of Nelson Mandela, while also bringing some tenderness to the man in moments when he’s not playing David to Apartheid’s Goliath. Jennifer Hudson is even better. She does very nuanced work, showing how Winnie is tough on the outside when she’s internally crumbling, and at her most fierce when her back is against the wall. Individual moments — Nelson hiding from the police in a closet, Winnie mentally breaking down after months in prison isolation — also harness some emotional power. Given the inherent drama in the Mandelas’ lives, it’s impossible not to become at least a little invested in the movie’s events.

Given that same drama, though, the picture should hit you like a ton of bricks. It doesn’t. There’s simply too much time spent reciting the facts of Winnie’s life and not enough time investigating her psychology. Winnie Mandela is undoubtedly an earnest film, but it’s ultimately too earnest for its own good. 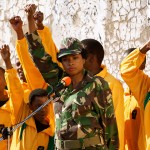 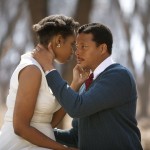 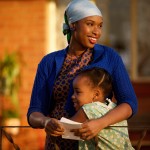