Down-Home Avengers.
Buy It From Amazon
Buy It On DVD
Buy It On Blu-Ray

Taylor Sheridan, writer of Sicaro and Hell or High Water, shifts the desolate setting from the dusty American Southwest to a snowy Wyoming Native American reservation for Wind River, the filmmaker’s first go-round at directing one of his stark screenplays. The frigid, unforgiving landscape fits the search for cold hard truths – not just of the crime at the story’s center, but of its residual effects and the wounds, old and new, that it opens.

Many elements are familiar, some of which seem transplanted directly from Sicaro. Both that film and Wind River feature inexperienced female FBI agents entering a world they’re unfamiliar with, guided on their journey for answers by men the with the specific expertise necessary to get them. Though the narrative territory is well-trodden, great performances and Sherdian’s calculated creation of dreary places, both physical and psychological, prevent this from feeling like (too much) more of the same.

Cory Lambert (Jeremy Renner), Wind River’s game tracker, discovers the body of local teen Natalie (Kelsey Asbille) in the snow, miles from the nearest residence. Young FBI agent Jane Banner (Elizabeth Olsen) is called in to investigate. Leaning on Lambert’s knowhow, awareness of the area, and knowledge of the reservation’s people, and with the help of the police chief (a naturally amiable, scene-stealing Graham Greene), Banner begins to unravel the mystery. Gunfire and gloominess follow in alternating doses.

Sheridan balances the emotional and fleshly carnage from the opening scene, building tension and keeping us off-balance. A sudden gunshot rings out as Lambert protects a flock of sheep from wolves. Then he collects his son from his ex-wife for some quality time, only to be called out to a ranch where a steer has been killed. It turns out a lioness is on the prowl in the area with her cubs. Soon after, there’s the discovery of Natalie’s body and the revealing of past trauma that makes Lambert especially sensitive to the situation. There’s always danger looking in them thar snow-covered hills, be it from organic predators or spiritual demons.

Renner mines depths he hasn’t approached since The Hurt Locker, and, similar to that film, creates a simple man with complex layers. He’s believably competent, obviously wounded, and easy to root for. Olsen is also subtle in her blending of clinical and caring personality traits. Her agent is unschooled in the ways of Wind River, but she’s far from a deer in the headlights when it comes to pushing ahead in the investigation. She’s quietly intense and equipped to handle herself when things quickly go awry. Her overwhelmed reaction when the medical examiner won’t rule Natalie’s death a homicide and upon learning of Lambert’s past don’t show that she’s out of her depth; they show how much she cares.

Commitment extends to exploring the setting. Buried in snow, Wind River is a wide-open space that’s beautiful but perilous. Appalling acts that lead to senseless death(s) feel like they come with the territory. The enormity of the expanse is crushing and sporadic flurries make inhabitants and their homes invisible. Loss is a way of life, from relationships and culture to hopes and dreams. Straightforward imagery like a tattered, upside-down American flag flying high over the isolated, forgotten community expresses the malaise. In his two scenes as the father of the deceased girl, Gil Birmingham embodies the customary discontent, grieving but almost in an acquiescing way. Even the final catharsis includes references to traditions that have disappeared.

While the full scope of the crime is eventually revealed in flashback and frontier standoffs abruptly erupt into violence – two intense gun battles are staged wonderfully by Sheridan, Wind River doesn’t pretend that bloody justice brings tidy closure. The scars of grief cut deeper than those from bullet fragments, and though the pain may transform, and maybe even occasionally ease, it always lingers. Especially in this place. 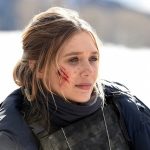 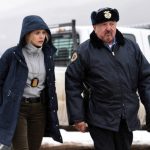 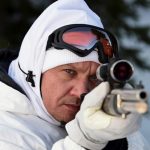