Will Success Spoil What We Love About Rose Byrne?
By: Pete Croatto

A lot of guys wish they were Rafe Spall in this still.

Rose Byrne, the classically beautiful 34-year-old Australian, does not mind being called a character actor.

“Oh gosh, my favorite actors are essentially character actors,” says Byrne when asked if she minds that designation. “That’s really how I’ve seen myself for a long time. I’m far more interested in doing that than whether that character happens to have more scenes or less scenes.” What matters more, she explains, is what the character is actually doing.

It’s getting harder for the “Damages girl” or “the lady in that thing,” which is both good and bad. Popularity leads to more money and bigger roles and junket interviews with marble-mouthed journalists, but a threat looms.

The bigger Byrne becomes, the greater the possibility she’ll stray from the fertile territory of Richard Jenkins or Catherine Keener. Does that bother her?

“Not right now,” says Byrne, who’s promoting her new comedy, I Give It a Year, which opened in select theaters Friday after playing on demand. Right now, she’s still in a place of “being fairly elusive, of people not really placing me.” She enjoys having a body of work she’s proud of while continuing to “strive to get better.” 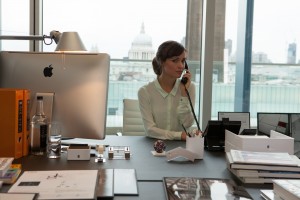 Adds Byrne: “I’ve felt lucky that I’ve been able to get away with being very different [in each role], and probably not carrying my past into the new one.”

Even without the headlining work — Bridesmaids, where she says she felt the effects of exposure, and TV’s award-winning Damages — we all knew Byrne. She was in the movie with Nicolas Cage. You know, with, what was it, an asteroid? And she was great in the one where she falls in love with the guy with Asperger’s; we caught it on cable the other night. And she was in 28 Weeks Later. Or was it 28 Days Later? Or both?

Name a genre and she’s done it, so when you see that Byrne is in discussions for a role in Will Gluck’s Annie remake — her response: “I’ll have to plead the fifth on that” — it’s barely a shock. After all, she did sing (hilariously and raunchily as pop princess Jackie Q) in Get Him to the Greek.

It’s one of many movies she has outright stolen despite not being the center of attention. You think she’s wasted in Knowing — the muddled 2009 sci-fi effort that probably helped Cage pay for his island and added solar flares to a neurotic’s list of apocalyptic scenarios — until you realize she’s the only character in the movie who acts as if the world is going to, you know, end. In The Internship, she provides the lone slice of human emotion in the oppressive bromance as a Google workaholic who allows Owen Wilson to break down her defenses. Everyone talks about Melissa McCarthy and Kristen Wiig in Bridesmaids while forgetting that Byrne got laughs and revealed the wounded soul behind her character’s country club perfection.

The substantive stretch continues in I Give It a Year, a frantic romantic comedy directed by longtime Sacha Baron Cohen collaborator Dan Mazer. In a movie that takes the inappropriate route to the point of numbness, Byrne, this time in the lead role, provides the best moment. And it’s not even comedic. She spots Simon Baker, who plays the man she can’t have because she’s married to an immature novelist (Rafe Spall). Her desperate, longing stare expresses every frustration, giving the movie a grace and emotional lift it doesn’t deserve.

Byrne was attracted to I Give It a Year to see what Mazer could do within a traditional rom-com plot. (She’s a longtime fan of the Working Title comedies.) And it deepened her appreciation for the type of acting involved. “I still find comedy pretty challenging,” she says. “I think it’s like drama but you’ve got to get a laugh on top of that.”

The comedies will continue. She just finished Townies, starring Seth Rogen and Zac Efron.  And she’s excited about This is Where I Leave You, an “ensemble drama” featuring Tina Fey, Jane Fonda, and Jason Bateman based on Jonathan Tropper’s heartfelt novel. Byrne says they’re roles she has not tackled before. Variety fuels her career, she says. So does “that feeling of, I’m not quite sure, I better not screw this up… The uncertainty is far more interesting to explore than the other.”

Complacency, where her name becomes shorthand for formulaic, isn’t part of the career plan. Thank God.