Why Him?
By: Blake Crane

He doesn't know, either.
Buy It From Amazon
Buy It On DVD
Buy It On Blu-Ray

Why Him? never answers its central question satisfactorily, nor does it justify the unfunny attempts to solve the conundrum. Much like the titular “him,” the movie is crass, obnoxious, and a chore to tolerate. Neither has any measurable redeeming qualities.

We start with two painful Skype conversations. In the first, James Franco threatens to go full frontal, and in the second he inexplicably shows his bare posterior to a room filled with his girlfriend’s family. It doesn’t get any better from there.

Any normal humans would hightail it from Laird’s estate within a few minutes. He immediately engages Scotty in a profanity-laced conversation, ogles Barb at dinner, and graphically discusses Stephanie’s physical attributes. But Ned and family stay, of course, because if they don’t there wouldn’t be the opportunity for charmless, lame gags and a seemingly endless string of general rudeness without purpose. The nearly two-hour runtime is cruel.

The artistic centerpiece of the home is a dead moose suspended in a glass tank filled with its own urine. Spoiler alert! The glass breaks. Though it’s a fine metaphor for the experience of watching Why Him?, it’s predicable and trivial. There’s a lot of literal toilet humor involving a high-tech commode, uncomfortable sexual situations, and running jokes with the home’s Siri-like digital assistant (voiced by Kaley Cuoco, playing the actual voice of Kaley Cuoco). She’s omnipresent and ever-humorless. The only laugh comes from the property’s free-roaming wild animals.

There was an opportunity to twist the Meet the Parents premise into a darkly comedic display of male ego and objectification of a loved one, or even a pertinent farce regarding generational schism, contrasting Laird’s modern business bro with Ned’s hardworking CEO who runs a failing printing company. Instead we get Cranston hiding under a desk while Franco has sex with his daughter on top of it and half-baked plot points involving Ned’s investigation of Laird’s financial dealings. Director/co-writer John Hamburg, who wrote Meet the Parents, gets lost in a repetitive, deadening pattern of set-up/weak payoff without any relevant context.

Stephanie explains she loves Laird because he’s completely honest and has “no filter.” Uh-huh. The crudeness that should get him slapped rewards him with a wonderful woman. Deutch is a shining light amid the disrespect, but her pivotal character is completely forgotten about and is only used to react to the two buffoons. Again, another inarticulate and unintended metaphor. The usually very funny Mullally is also neglected, while Keegan-Michael Key, playing Laird’s man-servant, is all facial hair and accent. His act is out of place here, but at least he gives some kind of characterization that could work in a different movie.

And whatever that theoretical movie was, I’d rather watch it than Why Him? again. 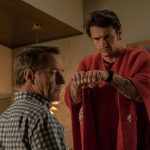 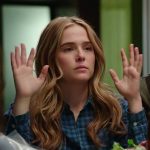 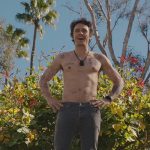 One thought on “Why Him?”