White Bird in a Blizzard
By: Blake Crane

Polly wanna dream sequence?
Buy It From Amazon
Buy It On DVD
Buy It On Blu-Ray
Buy The Soundtrack
Buy The Book

Coming of age by way of family turmoil is a moth-eaten theme that often tumbles into sappy melodrama territory. In the hands of director Gregg Araki (The Doom Generation, Mysterious Skin), it’s a jumping off point for a cockeyed exploration of teenage sexual awakening. The narrative momentum of White Bird in a Blizzard is powered by a central mystery, but Araki is best when favoring reflectiveness over rote plot development. A pragmatic approach to the vulgarity hooks us in, but a prosaic unpacking of facts makes bold performances by Shailene Woodley and Eva Green feel somewhat slight by association.

Kat Connor (Woodley) is a teen in 1988 southern California whose physical developments draw sometimes curious and sometimes satisfied stares at herself in the mirror. Open hostility from her mom Eve (Green) conveys repressed sexual frustrations. Eve is trapped in a loveless marriage with the boring Brock (Christopher Meloni) as Kat gallivants with chiseled lunk Phil (Shiloh Fernandez), lucky enough to live across the street when her hormones started raging. Kat is all about hooking up with her neighbor, but he has inexplicably lost interest in having sex.

One day Eve vanishes from her domestic prison without a trace. Did the pushover husband finally get pushed too far and snap? Did the vivacious housewife flee to hit the reset button? No one really seems to care too much. Kat and her father go to the police out of obligation, and Detective Scieziesciez (Thomas Jane) goes through the motions, gladly accepting his more immediate role of full-grown sexual conquest for Kat. Through a series of dream sequences and expository sessions with her therapist (Angela Bassett), Kat narrates much of her maturation through the suburban disorder.

Kat evolves into a confident, collegiate sex kitten, while flashbacks show Eve’s unraveling. The juxtaposition of recent past with present peels the onion of the mother-daughter relationship. Green spews vitriol without going full-on Mommie Dearest and manages to not become a caricature, even during transparent, martini-fueled attempts to impress young stud Phil. Woodley quite literally bares all in a composed performance that colors Kat as a complicated mix of cool chick and shrew. The weak link in the family circle is Meloni. The ineffectual husband/father is dominated by the two strong women by design, but Meloni’s mustachioed schmo feels false even in the excessively composed universe of the film.

Araki’s screenplay is adapted from the novel by Laura Kasischke, though he changes the ending and morphs the material to mesh with his celestial, David Lynch-ian panorama. While the film is set in the late ‘80s, much of the décor of the Connor’s home and Eva Green’s wardrobe suggest a 1950s Americana ideal that belies the material. In other ways, the ‘80s era is purposely over-staged. Kat wears a Depeche Mode t-shirt, has a Joy Division sticker prominently displayed on her bedside lamp, and her stereotypical misfit friends (Gabourey Sidibe and Mark Indelicato) are personifications of the mopey synth-pop soundtrack. The real world of the film is nearly as ethereal as Kat’s dreams, where Eve appears as an occasionally angelic and occasionally haunting figure. If Lynch’s influence wasn’t apparent enough in the craft, Sheryl Lee (Laura Palmer herself) pops up in a supporting role to remove any doubt.

As intoxicating as the mélange is at times, Araki mishandles the missing person case. Too often Kat’s narration provides useful facts or establishes her state of mind, creating a redundancy that borders on tedium. Woodley and Green prove they’re more than capable of showing us all we need to know or, more importantly, eliciting an emotional response, but Araki is intent on telling. Most egregious is the twisty ending – complete with commentary – that offers answers much less stimulating than the questions. White Bird in a Blizzard is about experiencing and exploring; when we get to a forced destination, it’s hollow. For all the metaphors about invisible fowl and hyperrealism, the film is finite when it had potential to linger. 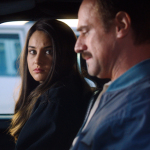 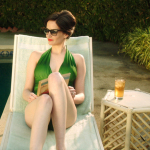 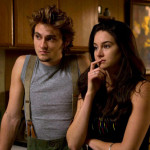