Oh, I get it. LOL
Buy It From Amazon
Buy It On DVD
Buy It On Blu-Ray

Whiskey Tango Foxtrot is like a stand-up comic who works blue to compensate for a lack of truly incisive material. A percentage of the raunchy jokes hit, but working with polarizing, and often misunderstood and inaccurately reported, topics cultivated from an embedded war journalist’s first-hand account should go a bit deeper than fish-out-of-water shtick and a standard empowerment message. Thankfully, Tina Fey’s charm and well-measured smartassery, along with a solid if underutilized supporting cast, make the routine tolerable and, at times, quite funny.

Fey plays Kim Baker, a version of Kim Barker, whose memoir The Taliban Shuffle: Strange Days in Afghanistan and Pakistan serves as source material for the film. Bored with her job writing news copy in NYC, Baker volunteers to be a correspondent in Afghanistan as the action of Operation Enduring Freedom shifts to Iraq. Understandably anxious upon arrival in Kabul, she’s steadied by welcoming local liaison/interpreter Fahim (Christopher Abbot) and becomes fast friends with British TV reporter Tanya Vanderpoel (Margot Robbie) and Scottish photographer Iain MacKelpie (Martin Freeman). The copious amounts of alcohol and seemingly endless partying at the journalists’ safe house also acts as a calming agent.

Baker’s first assignment establishes her as grievously inexperienced in this journalistic field, though capable and brave enough to handle the assignment. Her unfortunate choice of bag color (bright orange) draws the ire of Marine General Hollanek (Billy Bob Thornton) and she fumbles over interview questions, but when a convoy of Humvees is ambushed she leaps into the middle of the action with her camera.

From there, however, the stories of wartime drama and the crazy lives of those who are covering it become disjointed as directors Glenn Ficarra and John Requa struggle to establish a discernible arc. Titles mark the passage of years without any real sense of how the situation in Afghanistan is progressing (or unravelling), or how it’s affecting Baker. She swears a bit more and is more aware of local customs, but that’s about it.

The script by Robert Carlock, who worked with Fey on 30 Rock, contains several references to an embedded journalist becoming addicted to the chaos and seeking out increasing levels danger as means of personal fulfillment. Whiskey Tango Foxtrot never follows through on that idea. While on-air segments gone awry and lost in translation jokes work (and also recall Liz Lemon), there’s a sense of meandering that conveniently omits tougher elements. A potentially tense scene where Baker is set to interview a Taliban militant is undone with a signature bit of wit and is cut before the interview even beings. Her uncomfortable dealings with the newly elected Afghan Attorney General (Alfred Molina) always end on the same joke, until it becomes prudent for her to change the dynamic of their relationship.

As if realizing a complete lack of plot more than halfway in, Whiskey Tango Foxtrot reaches in to the narrative bag of tricks and pulls out several convenient components. Suddenly, there’s a potential romance, a professional conflict that had no groundwork laid, and a perilous wartime melodrama. After virtually disappearing for long stretches, Robbie, Freeman, Thornton, and Molina pop up when needed to sort through the contrivances of the final act. Though the actors are all very good with what they’re given to do – Thornton’s monotone crabbiness especially stands out in limited time, the characters are treated as mere facilitators.

Entertaining in bursts, though lacking insight, Whiskey Tango Foxtrot starves its strong cast and interesting premise, first with a bounty of vulgarity and finally with a hacky denouement complete with on-the-nose imagery depicting personal liberation. Are we really expected to believe that the years spent in such a harrowing, even if occasionally lighthearted, environment would result in such pedestrian messages? I mean, WTF?

The Blu-ray/DVD combo includes deleted scenes and several making-of featurettes, including a bit on the real Kim Barker. 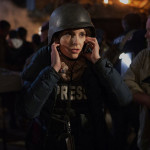 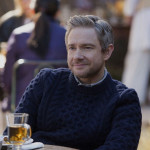