It may be just some kind of wild coincidence, but with last week’s release of Appropriate Behavior and this week’s release of We’ll Never Have Paris, it appears that there is a new indie film trend afoot — reworking Woody Allen comedies into vehicles for irritating New York hipsters.

Although in the case of We’ll Never Have Paris, the main character, Quinn (Simon Helberg – Howard Wolowitz from the long-running The Big Bang Theory) is more of a New York hipster schlemiel than mere hipster. Half Woody Allen and half Jerry Lewis, Quinn is a basket case of nerves and insecurities. He’s a hypochondriac who thinks he is going blind, his hands are shrinking, his nose is too big, and his hair is going white. But being an Allen/Lewis clone, his real problem is in relationships, particularly with his long-term live-in girlfriend, Devon (the under-utilized Melanie Lynskey). After talking to his dad the optometrist (Alfred Molina), who scares him straight (indicating all the middle-aged patients in his office, Dad quips, “see all those people in the waiting room? They were you yesterday”), Quinn is determined to finally ask Devon to marry him. Nervous as hell, he confronts her while she is taking a bath and he can’t get the words out (“I’m so immersed in everything I cannot see clearly”) so that instead of proposing, Devon ends up breaking up with him. Devon now attempts to swing with all the attractive women who for some reason throw themselves at him. This includes beautiful co-worker Kelsey (Maggie Grace) who confesses to Quinn, “You make me feel like a lady and you listen and you make eye contact.” And after their brief affair fizzles, she ends up stalking him, showing up at inopportune moments. A few failed dates and sleepovers and Quinn hunts down Devon to propose to her gain, but she has hightailed it to Paris. He follows.

Written by Helberg and co-directed by Helberg and his wife, actress Jocelyn Towne, We’ll Never Have Paris is purportedly based on Helberg and Towne’s own romantic screw-ups. If so, God help them. The situations are labored and derivative (the big humiliation scene at the end right out of The Nutty Professor and The Patsy) and clumsily staged.

There is also the emotional repulsiveness of the main characters. Devon is sketchy at best, but her abrupt eruptions at Quinn’s stammering and babbling make one wonder at her sanity. As for Quinn, Halberg tries desperately to be early Woody Allen. He delivers shotgun one-liners and even recreates moments from that touchstone film Annie Hall. But he hurdles over the Allen character and enters Lewis territory — but goes Jerry Lewis one better. Where Lewis would break down and collapse into psychotic stammering and gibberish, Quinn surpasses Lewis in that regard by becoming even more sickly sentimental, reverting to crying jags, weeping, and groveling. Helberg’s performance passes the point of comedy shtick and ends up looking like a case study for the DSM-5 manual.

However, Helberg and Towne have enlisted a sterling supporting case to bolster the proceedings. Alfred Molina has a worn-in charm as Quinn’s dad. Dana Ivey and Fritz Weaver are wasted but lend support just by being there. Zachary Quinto models a lot of nicely flowing clothes. Best of all is Judith Light as Devon’s mother. Her steely, incredulous gaze when Quinn shows up at her house looking for Devon is priceless. Also too is her retort when Quinn gets all weepy, “I thought when I saw you again I would slap you so hard that you would have to have your jaw wired shut. But when I look at you now you are like a poor, wounded gazelle.”

Ultimately We’ll Never Have Paris is a sporadically amusing minor league comedy retread. Any film needs a basis in reality and to believe that these two main characters would have any kind of relationship is taking a leap of faith. The only hope for Quinn and Devon lies in electroshock therapy and not a trip to Paris. 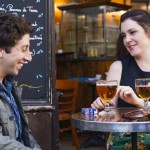 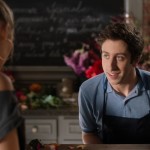 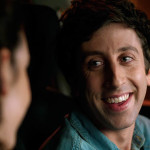