Welcome to the Punch
By: Bill Gibron

Goodbye with a kick!
Buy It From Amazon
Buy It On DVD
Buy It On Blu-Ray

It’s not enough to have good actors. In 2013, you need more than the standard “corruption from above” narrative. In order to keep contemporary audiences glued to your otherwise ordinary crime thriller, you have to add something people haven’t seen before: a unique supporting character; some wild visual flair; a surprise twist to take us out of the otherwise predictable plot. Welcome to the Punch provides little if any of these motion picture mandates. Instead, it tries to get by on the performances of leads James McAvoy and Mark Strong, and oddly enough it almost does. In the end, however, it falls victim to its own lack of invention and/or originality.

McAvoy is Max Lewinsky, a jaded British policeman with a bum knee and a bad attitude. He wasn’t always this way, but one night, he disobeyed orders and tried to stop career criminal Jacob Sternwood (Strong) and his gang of thieves in the middle of a heist and high speed chase. He got a bullet in the leg and a lot of grief from his commanding officers for his efforts. Now, three years later, he is trying to figure out the death of a young man near the docks in London. His new partner, Sarah Hawkes (Andrea Riseborough), isn’t sure he’s up to the job. In the meantime, Sternwood’s son is shot during the same altercation and he comes out of hiding in Iceland to find out who did it. Naturally, his path leads back to Lewinsky, who has a score to settle. In the end, they have to pool their resources in order to find out who’s behind the increase in gun violence — and availability — throughout the UK.

Moody, atmospheric, and yet utterly dull, Welcome to the Punch scrambles to be anything other than a direct to DVD diversion. It has delusions of cinematic grandeur, writer/director Eran Creevy imagining himself on the level of Guy Ritchie, Ben Wheatley, or Mike Hodges. Instead, he simply borrows from his betters, creating a hodgepodge of ideas that can be sleek and sophisticated one moment, downright dopey the next. The script, which keeps skipping around in order to make sure we see the evil/nobility on both sides of the law, struggles to stay focused. By the time Lewinsky and Sternwood team up for a last act showdown with the shady figures behind this crime, we get conspiracies piled on contrivances.

That being said, both actors are excellent. Sure, they’re not being asked to do much more than their already established onscreen personas, but when someone is as good at angst as McAvoy, you don’t really care. Similarly, Strong always finds the heart beneath the tough guy, as when faced with the truth about what happened to his boy. That moment, along with the death of a significant sidekick character, are the only real moments of emotional truth present in Welcome to the Punch. The rest of the film feels like a run-through for a bigger, bolder take on the subjects suggested. And that’s another thing — if you’re going to introduce the subject of gun control and the arming of police as part of your plotting, don’t just pay it lip service. Explore the social implications, not just the story possibilities.

While it remains mildly entertaining throughout, Welcome to the Punch lacks the snap, crackle, and pop of other contemporary examples of the genre. It wants to get by with elements that no longer really matter when it comes to cops and robbers. Over the course of the last few decades, we’ve gone from standard shootouts to glorified bullet ballets. Eran Creevy is not so ambitious, or talented. The results remain acceptable, if below average. 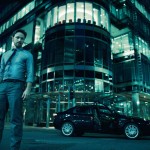 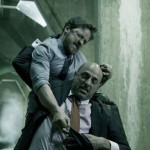 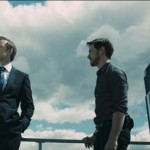