The Wedding Ringer
By: Bill Gibron

Do you want to build a snowman?
Buy It From Amazon
Buy It On DVD
Buy It On Blu-Ray

The Wedding Ringer is what we call a “vibe” film in the critic’s biz. Sync up to its particular brand of Hangover-lite faux Farrelly Brothers gratuity and you’ll probably have a good time. Just don’t let your brain get in the way, however. The premise here, and the execution of same, are so suspect and illogical that they call into question the intelligence of everyone involved, including the audience. Still, if you laugh, you laugh, and by Tinseltown accounts, that’s all that matters. Just know that Kevin Hart is in his typical quasi-motor mouth mode, with co-star Josh Gad an engaging, easy-to-identify-with lead, and maybe you won’t mind a slew of non-PC, homophobic asides. In fact, you’re the demo the studio is shooting for.

Gad is the typical post-millennial male: friendless and marrying WAY about his realistic life stature. His Doug Harris is successful enough to pay out a massive sum of money to a secret wedding “ringer” named Jimmy Callahan (Hart). Our enterprising entrepreneur specializing in such “best man” services, but our portly lead provides some unseen challenges. Doug doesn’t just need someone to stand up for him at the upcoming nuptials to fiancé Gretchen (The Big Bang Theory‘s Kaley Cuoco-Sweeting), he needs seven additional groomsmen as well. It’s what Jimmy refers to as a “The Golden Tux,” and he considers it a challenge.

From there on, it’s all about the ruse. Doug introduces Jimmy as a war vet buddy named “Bic Mitchum” (thus his MIA status) and soon they are surrounded by a group of hired stereotypes (jarhead, ex-con, nerd) acting as entourage. Gretchen’s family, including her stubborn father (Ken Howard) has a hard time believing the paid pantomime and we are constantly reminded that, once this is over, our protagonists will no longer “be friends.” It wouldn’t be a spoiler to suggest that such strictures are the reason the three act story arc was invented. That, and the final outing of the entire scam.

The Wedding Ringer is an R-rated interpretation of purely PG material. It’s Roger Ebert’s single question away from being wholly irrelevant. It believes setting an elderly lady on fire is the height of humor (poor Cloris Leachman) while “shocking” the viewers with Doug’s unusual dancing abilities. It’s eager to insult but isn’t quite sure how to do so — unless you’re gay, then the slurs just sing. Instead of embracing its obvious anything goes approach, this is a movie that constantly wastes its many legitimate opportunities for laughs. After all, how do you mess up a bachelor party? Or a reception speech? How do you offer up Kevin Hart, a comedian so fast on his feet that his mouth frequently can’t catch up and then let him deliver nothing but duds.

Of course, not everyone will agree. For some, this will be the second coming of Owen Wilson and Vince Vaughn. Call it fast food funny business, easily digestible and indistinguishable to the masses. No one is lining up for this film hoping for insights into relationships, real or unreal. They want to hear fat jokes, unexpected F-bombs, and the occasional dip into sophomoric scatology (like… bestiality???). You can also feel the desperation on behalf of first time feature director Jeremy Garelick (who co-wrote the script with Jay Lavender). He knows he’s got something good in Hart and Gad. His job is basically not to screw things up and even then he can’t seem to manage something that simple. His work behind the lens is just that bad.

While definitely not laugh-free, The Wedding Ringer is pointless. It treats women with disrespect while arguing that all fair in love and marital woes. For some, the names on the marquee are all that matter. For them, Hart and Gad will deliver. For anyone looking beyond such a forced bromance, the pickings and enjoyments will be slim indeed. 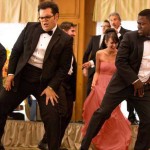 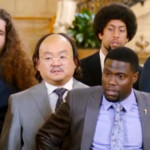 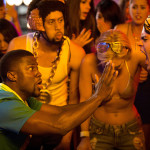 One thought on “The Wedding Ringer”