Where's Silent Bob when you need him?
Buy It From Amazon
Buy It On DVD
Buy It On Blu-Ray

Vigilante Diaries is the kind of movie that seems to come to a logical end after about eighty minutes. Then a character says, “You know, it’s not over,” and you sit there groaning because you realize she’s right. This is a slick-looking, but stunningly empty picture that contains more chaos than common sense.

Jason Mewes (Jay & Silent Bob Strike Back) plays Mike Hanover, a filmmaker whose YouTube videos have made a star out of the former black-ops agent known as “Vigilante” (Paul Sloan), who now takes down drug cartels. An Armenian mob boss named Andreas (Arman Nshanian) has kidnapped Vigilante and plans some violent retribution for killing his brother during one such operation. A bunch of Vigilante’s cohorts (played by, among others, former UFC champion Quinton “Rampage” Jackson) launch a rescue mission. But then Andreas kidnaps Hanover. He, too, is rescued. Then the mobster kidnaps Vigilante’s wife (Jacqueline Lord), so she must be rescued, as well. You certainly can’t say the movie isn’t repetitive.

Michael Jai White is also here, playing an opportunistic string-puller with connections to all the other characters. So is Michael Madsen playing, well, the Standard Michael Madsen Character – a vaguely threatening guy who skirts around the periphery drinking, smoking, and making liberal use of the F word. If all this makes Vigilante Diaries sound like the kind of movie that ought to feature Danny Trejo, rest assured that he makes a cameo appearance.

It is difficult to describe the actual plot of this film, in large part because it doesn’t have one. Director/co-writer Christian Sesma can never decide whose point of view the story is being told from. Sometimes it’s from Vigilante’s POV, other times from Hanover’s, and occasionally from Andreas’s. Madsen’s character periodically narrates things to the camera, so it’s also from his viewpoint. Story-wise, that indecision creates an unholy mess. Scenes often don’t appear to be connected to each other, a quality that worsens substantially in the second half, when the characters start bouncing around different countries for reasons that are never quite clear.

Then again, that slapdash nature makes sense, because Vigilante Diaries isn’t so much a film as it is a fetish reel designed to appeal to viewers who want to obsess over guns, muscles, blood, explosions, military tactics, fistfights, revenge fantasies, and martial arts moves. Oh, and women’s posteriors. Seriously, if a woman appears onscreen, Sesma makes sure to go out of his way to lustfully photograph her backside. (Later, Vigilante’s wife, who has a newborn, is shown to have rock-hard abs. In the world of this movie, hotness is the only female attribute that matters.) Anyone interested in plot development, characterization, or a reason to care about any of the above-mentioned things will come up empty-handed.

There is, of course, nothing wrong with the occasional lightweight action movie. But while Vigilante Diaries has good production values, the action isn’t especially fun to watch with nothing supporting it. In addition to the lack of a coherent or compelling plot, the film also boasts dull performances. Mewes and Madsen rely on the same tired individual shtick they utilize in most of their movies, Jackson is stiff on camera, and Sloan isn’t given enough to work with in order to make Vigilante an engaging hero. (It’s his own fault, given that he’s the other script writer.) As for the villain, Arman Nshanian does stereotypical foreign bad-guy work, giving Andreas a perpetual scowl and delivering even the most mundane of lines with melodramatic seething. And let’s not forget Mike Hatton as Barry, the sole gay character who perpetually makes double entendres, because that’s apparently how the filmmakers believe all gay men behave. Only Michael Jai White is semi-interesting, so it’s too bad that he has relatively few scenes.

Again, there’s no emphasis whatsoever on the things that typically make a movie appealing to watch. There’s just an excess of bloody violence presented for its own sake. Vigilante Diaries is nothing more than a 105-minute salute to mindless gunfire and punching. 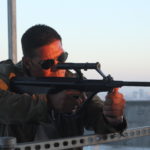 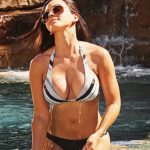 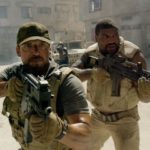 One thought on “Vigilante Diaries”