no defense against these dark arts.
Buy It From Amazon
Buy It On DVD
Buy It On Blu-Ray

Mary Shelley’s classic novel is remarkably rich and ripe for adaptation, as evidenced by the laundry list of productions using the tale as inspiration. There have been a few high points: Boris Karloff donning the neck bolts, Peter Boyle squealing through “Puttin’ on the Ritz,” and Gary and Wyatt creating a woman with their computer. Victor Frankenstein includes nothing that approaches that level of vision, though it’s not for lack of trying. Director Paul McGuigan’s film throws in a bit of everything – cheeky humor, horror, action, romance, God vs. science debate – all of it half-baked, with the mismatched parts sewn together haphazardly.

Despite the title, the story is told from the perspective of the mad med student’s (not quite a doctor) faithful assistant Igor (Daniel Radcliffe). As with everything in Max Landis’ script, the story of how the pair team up uses colorful detail that is lacking in any real substance or merriment. Igor isn’t even Igor at first; he’s just a hunchback circus performer that Victor (James McAvoy) frees from the freakshow after learning of the curved man’s medical genius. He’s read a bunch of books, you see; though apparently not enough to realize that his deformity is really just a big abscess. Victor drains the fluid from his back, slaps a back brace on him, gives him the name of a former roommate, and after a quick shower Igor is a prim and proper London gentleman.

Victor and Igor dive right into Frankenstein’s passion project – reanimating a small creature cobbled together from animal parts. When the weird mostly-monkey beast springs to life during a medical school demonstration, Igor questions the project while Victor is even more encouraged to move from animals to a hulking, thinking human. While Victor Frankenstein gets there eventually, the monster mayhem is left for a hollow, rampaging, and very brief climax. Much of the space in-between is filled with Igor’s flirtations with a trapeze artist (Jessica Brown Findlay) and a clunky investigation from True Believer/Scotland Yard Inspector Turpin (Andrew Scott).

None of the various threads are given enough focus to contribute to the larger narrative, including Frankenstein’s newly invented reasons for wanting to create life from death. McAvoy injects some buoyancy and is given a couple of good zingers – the comeback about the pronunciation of his name is pretty good. He’s an energetic ball of madcap pep and frenzy, but it serves little purpose and he’s reduced to expressing excitement through jovial fast-talking and pain through spittle-peppered rants. There’s potential with Igor, almost taking the place of the absent monster with Frankenstein plucking him from a form of non-existence and giving him a life, so to speak. But even though he was nameless and homeless, it didn’t take much for Igor to blossom and his arc is more in service of plot than character.

From the rollicking circus escape reminiscent of Guy Ritchie’s take on Sherlock Holmes, to the grey dreariness of Victorian London, decidedly PG-13 shocks, and flimsy commentary, Victor Frankenstein does nothing to justify its existence. It’s lifeless. 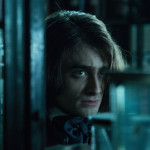 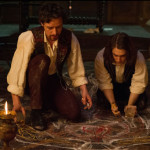 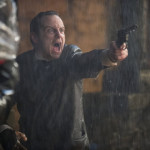