Head cleaners, half off!
Buy It From Amazon
Buy It On DVD
Buy It On Blu-Ray

There are 20 decent minutes buried in the middle of horror anthology V/H/S: Viral, but there’s no compensating for the irredeemable dreck that surrounds them. You could consider yourself lucky if the bookend sections were accidentally recorded over or eaten by your VCR. Of course, that doesn’t make any sense in the Blu-ray/digital age, but V/H/S has never made any sense, either. The first two films (a term used loosely here) in the series were held together by overarching, vague mysteries that made no sense but at least adhered to a VHS-involved conceit. This third installment, comprised of four sub-chapters, also makes no sense, but also ditches the lo-fi concept for a majority of the runtime. Random, artificial tracking issues and blue screens don’t count. Neither does the persistent POV shakiness dressed up as shocks.

Loosely holding the individual segments together is wraparound story Vicious Circles, directed by Marcel Sarmiento. The “viral” portion of the title is represented by groups of teens chasing a runaway ice cream truck with cell phones and camcorders in hand, hoping to capture a YouTube-ready snippet. The most frantic is Kevin (Patrick Lawrie), whose girlfriend Iris (Emilia Ares Zoryan) disappears during the commotion. Countdowns on hacked phone displays and bloody noses on zombie-like rubberneckers are supposed to add suspense, but because we’re dropped back into this story five minutes at a time, there’s no through-line to grab onto. Oh, the irony of a quest for junk food news stories by way of a vehicle full of Bomb Pops and Creamsicles.

Because an ice cream truck running over a cop is a beautiful segue, we’re tossed into Gregg Bishop’s Dante the Great, about a magician corrupted by the power of his enchanted, and probably demonic, cloak. Emmy Argo creates a semblance of a character with an ambitious assistant turned heroine pitted against the megalomaniac, but Bishop focuses on the cheap tricks. The structure is also a mess with a mix of talking head documentary, security camera recordings, and ungraceful deviations from the found footage style.

After jumping back to watch the ice cream truck drag a biker for a bit, we finally get something watchable with Parallel Monsters from Nacho Vigalondo. Alfonso (Gustavo Salmeron) builds a portal to a parallel dimension, where he finds another version of himself who has built a similar gateway. The doppelgangers agree to explore the other’s universe for 15 minutes and what they find is very different from what they’re used to, especially when it comes to wife Marta (Marian Alvarez). There’s actually storytelling and world-building on display here, using a constricted timeframe to clearly delineate these worlds and actually interest us in what may happen next. There’s even some social commentary, from two societies, and a suave twist that works in the shorthand structure.

Not nearly as polished or astute, the worst segment is saved for last. In Bonestorm, punkish L.A. skateboarders head down to Tijuana for hijinks. They make the age-old mistake of performing their kick flips over a spray-painted pentagram surrounded by animal carcasses and strange shrines. Waves of cloaked figures appear and lots of fighting and shooting ensue. It holds the same amount of excitement and intrigue as watching a couple of tweens playing a first-person shooter on Xbox, complete with the punchy dude-bro articulations.

In the end we’re led to believe that these incongruent shenanigans “mean something,” which is both perplexing and laughable. While the occasional segment may have its merits, as with Parallel Monsters here, the V/H/S anthology franchise adds up to nothing beyond its concept. One can only hope V/H/S: Viral finally pushes this series into the same extinction as its namesake video format. And that it’s never rebooted as D/V/D or V/O/D. 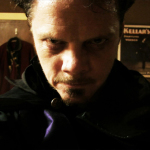 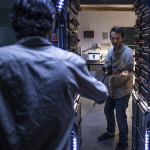 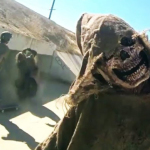