Valerian and the City of a Thousand Planets
By: Bill Gibron

Fear my eyebrows.
Buy It From Amazon
Buy It On DVD
Buy It On Blu-Ray

If eye candy were actually fattening, Luc Besson’s latest effort, Valerian and the City of a Thousand Planets, would make every viewer morbidly obese. There has never been such a mind-blowing mediocrity. You’ve heard about style over substance? How about pure vision over anything remotely close to logical. There hasn’t been a movie this obsessed with its own imagery since David Lynch tackled fatherhood with Eraserhead. Besson brought a similar sensibility to his 1997 epic The Fifth Element. With Valerian, he goes completely overboard, spending so much time on his look that the rest of what makes a movie gets lost, or ignored.

The titular location is a former International Space Station that has become a gathering place for all the known species in the universe. Naturally, something that special is the target of a conspiracy, and it’s up to our heroes to figure out what’s going on. Major Valerian (Dane DeHaan) and his partner, Sergeant Laureline (Cara Delevingne) are part of a special police force that helps preserve the peace. On a mission to the Black Market, they discover an unknown force which threatens the center of the station. While escorting their Commander (Clive Owen) to the troubled spot, they are ambushed and he is kidnapped. All paths lead to a primitive humanoid culture looking to a way get back to their home world.

Trying to explain the plot of Valerian and the City of a Thousand Planets is like trying to understand Gravity’s Rainbow by using James Joyce’s Ulysses as a guide. It is a confusing pile of pseudo-sci-fi gobbledygook which tries to condense a well loved comic book series into a comprehensible film. Besson believes he has a handle on this material. After all, he has been working on the film since his days on Element, and he’s poured a great deal of money into it. At somewhere between $177 and $180 million, it is the most expensive independent European film ever.

Granted, every dollar (or Euro) is up on the screen. The sheer amount of imagination present in every frame would be enough to warrant at least one viewing of this film. But Besson believes so intensely in the ancillary elements and accessories that he skimps on the plotting and the characterization. Again, you could sit in awe of Valerian and the City of a Thousand Planets and not really care that you aren’t being engaging emotionally or intellectually. But at a certain point, all the razzle dazzle becomes overkill and as the abundant action sequences scream through CG-executed 3D landscapes, you grow wild eyed, and then weary. One thing’s for sure, this is a very overwhelming experience.

Besson’s belief in all of this shows in every second of this overlong experience. From an intriguing opening set to David Bowie’s “Space Odyssey” to a finale which seems to find the entire population of the City at odds, he feels that you will simply settle in and go along for the ride. This is because the new model for moviemaking circa 2017 is to provide as much easily digestible visuals as possible, making Valerian an easier sell around the world. In fact, before a single frame hit theaters, Besson had pre-sold the film to regions like China and India.

So instead of selling itself, Valerian and the City of a Thousand Planets is already booked to make bank. But don’t confuse cash with aesthetics. The movie may look terrific, but it fails to invest the viewer in the stakes at hand and the outcome of them. We don’t care about Valerian or Laureline, their on-again, off-again flirtation, or the main mystery’s denouement. We’re just overwhelmed by…stuff. If you can get through it, you’ll probably enjoy the experience. If you can’t, then Valerian and the City of a Thousand Planets will be so many empty entertainment calories. 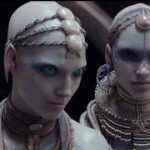 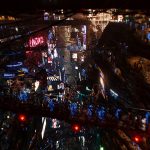 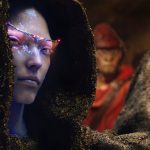