in the membrane.
Buy It From Amazon
Buy It On DVD
Buy It On Blu-Ray

In an era of “fake news” and #MeToo, Unsane has a timely theme of gaslighting and manipulated reality. Focused on a woman who sees her stalker everywhere—including the mental facility where she unwittingly commits herself—Unsane also has a relatable thread about how another person’s unhinged behavior can affect your own sanity.

Director Steven Soderbergh (Logan Lucky, the Ocean’s Eleven films, Traffic) hasn’t played in the low-budget pool for a while. But since his sort-of retirement a few years ago, he’s reemerged with an experimental flair. Shot with an iPhone camera on a budget of about $1.2 million, Unsane has some of the look and character-driven feel of his 1989 breakthrough Sex, Lies, and Videotape.

Claire Foy (Breathe, TV’s The Crown) is a standout as Sawyer, a financial whiz who moves from Boston to Pennsylvania because of a job opportunity she claims was too good to ignore. She hides the real reason from her mom (a welcome Amy Irving of Traffic, TV’s Zero Hour): She was desperate to escape David (Joshua Leonard of TV’s Scorpion and Bates Motel). The man latched onto her after watching her read to his incapacitated father as a hospice volunteer.

Brusque and brittle, Sawyer tries to connect with other people but can’t even initiate a one-night stand without crumbling. She seeks out counseling, and her glib, professional persona cracks as she describes still seeing David everywhere. “Who would want to live like that? I wouldn’t,” she says, a comment that some might see as innocuous but the counselor (Myra Lucretia Taylor of The Big Sick) jots down as suicidal.

She hands Sawyer some paperwork, which Sawyer fills out without unbelievably reading the fine print. That commits Sawyer voluntarily until the facility determines she’s no longer a danger—a tough hurdle once she thinks an orderly is David. Naturally, every time she insists she doesn’t belong there, she digs herself in deeper.

The script by Jonathan Bernstein and James Greer (both of The Spy Next Door) doesn’t keep us guessing for long. But it gives Sawyer biting dialogue as she tries to keep her wits, and Foy is ferocious. The facility’s doctor (Gibson Frazier) barely listens to her, the police don’t bother, and most of the patients and staff either laugh at her or belittle her. Who does she think she is?

It also creates some real sympathy and horror in intimate moments. When a Boston cop (an uncredited Matt Damon) in a flashback advises Sawyer how to stop David from bothering her, his suggestions imprison her well before her commitment. Ditch her car for a ride service. Delete her social media profiles. Avoid photos with friends.

Saturday Night Live alum Jay Pharoah (Ride Along, TV’s White Famous) turns in a rare dramatic performance as Nate, a fellow patient with a secret. He develops a touching chemistry with Foy as a fast friend under tough circumstances. “An impersonation of a friend,” he teasingly corrects.

Unfortunately, the script also places these characters in one of the more questionable mental facilities around. The yellow institutional lighting and wood paneling look at least two decades too old. Men and women sleep in the same open room, regardless of diagnosis. The staff just stands around as one patient (Juno Temple, Wonder Wheel) antagonizes Sawyer repeatedly. And there’s an insurance scam.

By the time bodies start to pile up, so do the implausibilities. Still, Unsane is unsettling whenever it stays grounded. 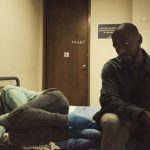 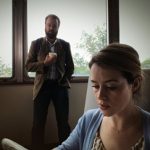 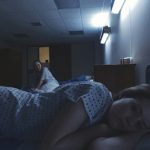