No one's liked my status!
Buy It From Amazon
Buy It On DVD
Buy It On Blu-Ray

Unfriended is a gimmick-based horror movie. Like The Blair Witch Project, which turned the first person POV found footage approach into a now well-worn waste of time, and Paranormal Activity, which mounted a similarly styled camera on a tripod to capture the spooky goings-on in a couple’s suburban home, this macabre novelty finds a group of friends haunted by the spirit of their dead girl, a friend who killed herself over cyberbullying. Told completely through our lead girl Blaire’s (Shelley Hennig) laptop screen, it’s a clever combination of Skype chats, Google searches, YouTube videos, and good old-fashioned jump scares. Sadly, it’s never truly terrifying, just fun in a novel sense.

On the anniversary of the suicide of their classmate Laura Barnes (Heather Sossaman), a group of friends — Blaire, her main squeeze Mitch (Moses Jacob Storm), his best pal Adam (Will Peltz), party gal Val (Courtney Halverson), queen bee Jess (Renee Olstead), and computer nerd Ken (Jacob Wysocki) — get involved in an online conversation about the death. Suddenly, an anonymous individual joins the discussion. They claim to be Laura, out for revenge against those who posted an embarrassing video of her on YouTube and more or less mocked her to death. As they panic and attempt to figure out who the intruder really is, Blaire’s buddies start dying off, one by one. That’s it.

Horror is typically a matter of perspective. If you can see yourself in the situation on screen, if you can imagine what it would be like to be stalked and slaughtered by an unseen presence while you are casually clicking away on your computer, then Unfriended will seem like the scariest movie ever made. While rated “R” — meaning no one under 17 should be in the audience — this is a film made specifically for a high school and younger crowd. For them, every tech beat, every hoary old horror trope, will feel familiar and yet fresh. For anyone over the age of 20, however, this entire experience will seem solid, if kind of silly.

Since Laura’s death drags in the current craze over bullying, you’d figure writer Nelson Greaves and director Levan Gabriadze would have more to say on the subject. Instead, it uses such awful adolescent behavior as the set-up for a pseudo-slasher film. Once we realize the rules of the online “game” and see that each rejection of the “rules” leads to something nasty, we anticipate the kills. But thanks to a desire to diddle with the filmmaking approach (the single static computer screen), we get little impact from each death. Instead, Gabriadze uses pixelation and pauses as a means of hiding what appears to be a decent amount of gore. We want blood. We get buffering.

Then there are the characters themselves, a cookie cutter collection of yearbook cliches who come across as clueless and incapable of involving any nearby adult in their 75 minutes fright marathon. Granted, we can understand why they wouldn’t “initially” want grown-ups involved, but once they see their friend shove his hand (and then his face) into a running blender blade, the time to avoid Mommy and Daddy is over. Also, with all the tech on display, we only get a single moment of attempted hacking. It’s one of the few sequences of tension is what is otherwise a loud and chaotic experience.

Still, we get wrapped up in the familiar social media elements. We laugh at some of the dumb things these teens do (“Let me go check out that noise…”) and marvel at how easy it is to use Chatroulette to get someone two states away to send the local sheriff to your house. Gabriadze makes the most of his cinematic stunt, taking it to the very limits of what it can offer as a storytelling style. There is very little dread in Unfriended. Luckily, this is one of the rare occasions where an aesthetic decision drives the experience. You’ll find most of this film engaging. It lacks in the legitimate fear department, however. 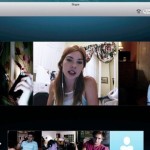 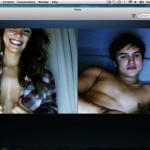 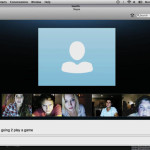