Is that he end of my career calling?
Buy It From Amazon
Buy It On DVD
Buy It On Blu-Ray

Vince Vaughn is done. At one time, he was the next big thing. Now, he’s nothing more than Chevy Chase, his similarly depressed demeanor and sad eyes signaling the end of his time as a potential movie star. Since 2005 and Wedding Crashers, he’s been in Fred Claus, Four Christmases, Couples Retreat, The Dilemma, The Watch, The Internship, Delivery Man, and now Unfinished Business, a string of flops so heinous he should be put out to pasture with fellow unfunny man Adam Sandler. A comedy is supposed to have jokes. This one just has ideas for them.

Indeed, any film which has the possibility of riffing on Germans, the gay leather scene, Oktoberfest, and slimy business deals can’t get by on one character’s innate stupidity, but that’s what Unfinished Business does. Dave Franco steals the movie from everyone else as a novice salesman who gives new meaning to the word “slow.” His malapropisms are cute and he sells the silly lines given to him by scriptwriter Steven Conrad (The Pursuit of Happyness, The Promotion). It may be one dimensional and dopey, but it works. What doesn’t is Tom Wilkinson’s aging sex obsession, even if lines like “I’m not seeing enough titty” have a playful purpose.

The story centers on Vaughn’s Dan Trunkman, a hardworking industrial scrap metal executive who’s been passed over for promotion by slimy supervisor Chuck (Sienna Miller). He also has issues at home, including an overweight son who’s being bullied, a little daughter who wants her daddy, and a wife who thinks money will solve all these problems. Striking out on his own, Dan recruits Tim (Wilkinson), who is forced to retire because of his age, and Mike (Franco), whose naivete and last name cause mass confusion. Hoping to close an important deal, the trio head to Germany where they run into Chuck, the equally sleazy Jim Spinch (James Marsden), and an associate (Nick Frost) who could be the key to their success.

There’s nothing worse than a supposed laugher that just lays there, and Unfinished Business is as dormant as a dead rat. Running gags consist of Wilkinson’s obsession with the “wheelbarrow” position and Franco’s character’s name (which we won’t spoil here), while every few minutes, the gross-out merriment stops so Vaughn can play helicopter dad from afar. The “dramatic” scenes with the family are forced and unnecessary. After all, they didn’t consistently stop The Hangover to make sure Bradley Cooper’s love life was settled and we still giggled along with his escapades. No, this movie doesn’t understand the delicate balance required to make both facets work. As a result, neither do.

Certainly there are things that succeed. Frost turns out to be a gay leather bear, and his “outing” in a glory hole-filled men’s room offers a few chuckles (and a lot of penises). Again, Franco could read a shopping list in Mike’s meek voice and we’d smile. Even Vaughn gets in the occasional zinger (shout out to Snoop Lion) but it’s not enough to save Unfinished Business. Director Ken Scott, working with his lead for a second time (they collaborated on the equally awful Delivery Man), doesn’t understand tone or timing. He thinks manipulated heartache and outrageous bad taste can coexist without issue. Sadly, only John Waters can make that happen.

Instead, Unfinished Business is all setup and no punchline. It’s an idea for a comedy hollowed out and replaced with frat boy foolishness and hard “R” raunch. There’s potential here, and an entire movie could be made out of a group home resident (Franco) who falls in with big business and its corrupt, calculated ways. But nothing like that happens. Instead, Vaughn wears the look of a dead man walking. It’s the same face that doomed a former SNLer decades before. 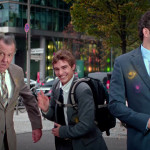 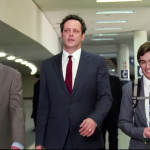