Now who wants a candy cane?
Buy It From Amazon
Buy It On DVD
Buy It On Blu-Ray

Welcome to the Tyler Perry downturn. Say hello to the exact moment when his moxie more or less dries up and he begins to show signs of eventually falling off the fad gadget bandwagon. As one of his staunchest supporters (and apologists), it’s hard for yours truly to complete fault the filmmaker, playwright, TV tycoon, and entrepreneur for what he’s been doing so effortlessly for years. But A Madea Christmas misses the mark by a wide margin, falling into the same trap that tilted Madea’s Witness Protection over into the “pointless” column. When he stayed within his niche demo and made movies specifically for his fans, he was a solid is slighted contender. Not a master, but a likeable mess. Now, by attempting to broaden his appeal — with Jewish characters in Protection, here with goofball rednecks — he shows that his understanding of character hasn’t developed past the clueless cliche stage.

The main issue in this film is interracial love… in the South… with Larry the Cable Guy and Kathy Najimy as the drawling in-laws that Madea’s (Perry in perpetual drag) niece Eileen (Anna Maria Horsford) suddenly has to deal with. You see, our oversized man-handed granny with a gravelly voice gets a job at the department store where her relative works. She’s a horrible holiday greeter, and her anecdotes all revolve around smoking dope, committing crimes, and basically being the worst elderly person in the history of human existence. In the meantime, Eileen’s daughter Lacey (Tika Sumpter) is a school teacher in the South. She is married to a nice white farmer named Connor (Eric Lively) and is trying to save her small town’s annual holiday jubilee.

Since she doesn’t want her mom to know about her new man, she informs the family that she won’t be coming home for Christmas. Madea and Eileen will have none of that, and they make immediate plans to travel below the Mason Dixon line with a former fling of Lacey’s (J.R. Lemon) in tow. He’s a possible corporate sponsor for the festival. Once everyone arrives in BFE Alabama (actually the town of “Bucktussle”), we get such “hilarious” set-pieces as a run in with the KKK, an evil corporate entity that wants to take religion out of the season, some random school bullying, and to top it all off — a shirtless Larry the Cable Guy. Deck the Halls, y’all.

For those familiar with the play upon which this is based… wait a minute. That’s a lie. There is nothing about the film version of A Madea Christmas that resembles its stage origins. That production revolved around a snotty family that wouldn’t give a young servant the holidays off. Since she’s Madea’s niece, our feisty old gal invites herself and the rest of the lower class clan over to Cape Cod for some culture clashing. Sure, one could argue that the whole country mouse/city mouse, North/South dynamic is similar in style, but whereas the theater experience was inspiring and fun, this big-screen debacle is not.

Perry is just putting too many cogs into motion here. He wants to address several current subjects through his old school Christian sensibility, and it all ends up ringing hollow and shrill. Sure, seeing him trade quips with CMT’s answer to Mort Sahl is a bit of a pip, but overall, the movie lacks the drive and determination of his previous efforts. It’s as if, by adding diversity, he’s addled his already insular approach. Usually, Perry prickles at racism and rejection. Here, he’s trying to make it merry and bright. Exactly.

With a built-in audience eager to support his every move, A Madea Christmas will probably succeed despite itself. On the other hand, those looking for an alternative holiday film would be better served seeking out something truly inspirational — like Silent Night, Deadly Night, perhaps? 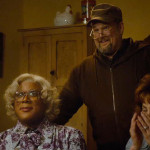 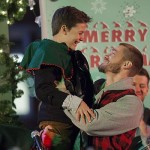 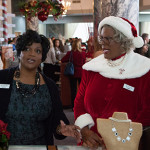 One thought on “Tyler Perry’s A Madea Christmas”