Look at that "S" car go...
Buy It From Amazon
Buy It On DVD
Buy It On Blu-Ray

If you can get past one glaring critical concern and don’t care too much about how your ankle biter will view the minority population of our society, you will adore Turbo. It’s a rousing bit of family filmmaking, a truly inventive work that rivals Pixar products in imagination and motivation. Unlike other product from DreamWorks’ animation division, this story of a snail with dreams of being a speed demon doesn’t overdose on pop culture references, stunt voice work, or blatant audience pandering. Instead, it looks to establish character and situation before getting down to the business of playing to its demo. Sadly, it takes a shortcut in doing so that may give the more mature members of the audience pause.

Turbo (voiced by Ryan Reynolds) is obsessed with auto racing. He even imagines himself as the winner of the Indy 500. Naturally, his no nonsense brother, Chet (Paul Giamatti) thinks he’s crazy. He wants his sibling to settle down and join the other snails in their daily ritual of avoiding predators while raiding their home garden of its tomato crop.

One night, Turbo ventures out into the streets and near a highway. He is somehow sucked into the engine of an illegal hotrod and his DNA is merged with a blast of nitrous oxide. The next thing you know, our hero is the fastest gastropod in history, something a local taco bus driver named Tito (Michael Peña) thinks will boost business at his struggling food stand.

Along with his brother Angelo (Luis Guzman) and the other residents of a failing strip mall — mechanic Paz (Michelle Rodriguez), nail salon owner Kim-Ly (Ken Jeong), and hobby store proprietor Bobby (Richard Jenkins) — our doting dreamer believes in Turbo, and agrees to find a way to get him into the big race. At first, officials are flabbergasted over how to handle the situation. But when multiple Indy winner Guy Gagne (Bill Hader) stands up for the snail, all eyes are on the annual contest and the little garden critter that could.

Here’s the biggest problem with Turbo. No, it’s not the still shameless over-reliance on the 3D gimmick, which means most of the action scenes have to have a pointless first person POV thrust. It isn’t even the occasional reliance on silly hip-hop slang (mostly from Samuel L. Jackson and Snoop Dogg as members of an opposing snail racing team). Indeed, for the most part, the movie is fast-paced, entertaining, and a whole lot of fun. It’s also borderline racist. No, it doesn’t come right out and call any member of its mostly ethnic cast of characters by a specific hate crime moniker, but it sure uses stereotypes as a quick reference point for personality and purpose.

Name a minority — Latino, Asian, African American — and Turbo takes the easy way out. It’s not blatant, but it does draw attention to itself. Instead of offering up complex character designs, it’s all Mexican food, street jive, and incredibly thick accents. One could cheer the filmmakers for turning attention to an often unsung and underrepresented portion of the movie going public, but then they earn equal jeers for using heritage, not human nature, as a reference. The kiddies won’t care. They’ll be too caught up in the main character’s wacky adventures to see the signs. Parents, on the other hand, may have a hard time explaining to their wee ones why every person of color they see is not some food stand worker or sassy street thug.

Within this conundrum lies one of the better family films to come out of the seemingly endless parade of animated adult parenting aids. Turbo is a good time. It’s also an occasionally troubling one. 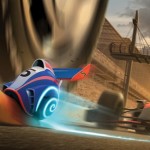 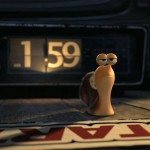 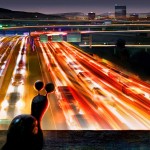 One thought on “Turbo”