This night, the last knight!
Buy It From Amazon
Buy It On DVD
Buy It On Blu-Ray

At this point, it’s safe to say that Michael Bay no longer cares. Either that, or he really enjoys the high life his billion dollar Transformers franchise has provided him. Why else would the man make movie after pointless movie about mechanical heroes and villains, all delivered in a shockingly incoherent style that detracts from, not adds to, the mandatory action sequences on display? We can no longer follow the mythology built around the Autobots and the Decepticons, the entirety of Hasbro’s toy line being throw into the mix to maximize the merchandising capabilities of each title. At least they replaced Shia LeBeouf with Mark Wahlberg, though many might argue the performance margins for all the actors involved are razor thin.

The Last Knight, which is probably not the final installment in the series, brings Oscar winner Anthony Hopkins into the fold, doing his best to turn the bass-ackward narrative provided by a plethora of screenwriters into something intelligible, and when Hannibal Lecter fails, it’s the audience who loses, big time. Attempting to tie in a whole reboot take on King Arthur and the round table thing, we are introduced to Merlin (Stanley Tucci) as he gathers a group of Transformers together, and using them, conjures a dragon to help defeat the kingdom’s enemies.

We move to the present, there the TRF (the Transformer Reaction Force) seeks to get rid of all the robots on Earth. In the meantime, Optimus Prime (voiced by Peter Cullen) has arrived at Cybertron, his homeland, and learns that its many pieces are headed directly toward the third rock from the Sun. The Sorceress known as Quintessa (Gemma Chan) is controlling things and she wants the “magic” staff that the ancient Transformers gave Merlin. She turns Optimus into a bad guy — Nemesis Prime — and sends him back to retrieve it.

As for the humans, current TRF member William Lennox (Josh Duhamel) helps set Megatron (Frank Welker) free, the evil machine tracks down Cade Yeager (Mark Wahlberg) and the rest of the Autobots. He ends up teaming up with an Oxford professor, Vivian Wembly (Laura Haddock), and finds out about the connection to King Arthur from Sir Edmund Burton (Hopkins)…and then things REALLY get complicated.

As you can tell, there is way too much plot in Transformers: The Last Knight. To call it all “convoluted” would be like labeling director Bay a master of subtlety. If past installments in this series seemed like nothing more than two-plus hours of mayhem and explosions, The Last Knight takes bombast to a whole new level. The movie is almost incomprehensible in its desire to hyper-stylize the action, making it impossible to keep track of who’s winning and who’s losing. The narrative spirals into itself time and time again, causing the film to implode over and over.

Listen, if you feel invested in these films, if you find them to be mindless slices of popcorn entertainment that deliver exactly what they promise–over the top sci-fi spectacle with more CGI candy than a dozen competing titles–then so be it. The Last Knight lives up to its intentions and then some. But as a film, as an actual attempt to tell a story and offer clever characters, this is a big fat fail all around. Even the desire to tap back into the Arthur mythology seems like an act of desperation. Nothing is normal and nothing really works, but its destined to be a hit since it covers all the concerns an international audience are clamoring for.

The Last Knight? Hardly. The end credits promise even more robot anarchy to come, which means we will be seeing more Transformers, not less. And with anything associated with Michael Bay, there is no such thing as less. 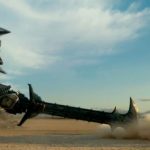 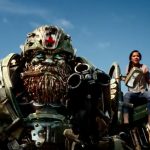 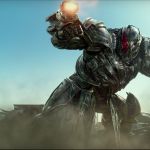