What about lodging?
Buy It From Amazon
Buy It On DVD
Buy It On Blu-Ray

At this point in the Transformers franchise, any review is moot. Fans have consistently made Michael Bay’s cinematic monstrosities equally gargantuan hits, with the last entry — Dark of the Moon — finally joining the rarified air of the Billion Dollar Box Office Club. So there’s no need for this critical conversation, no requirement to point out plot holes or continuity errors. Audiences apparently enjoy the King of Excess’s overwrought action sequences and grade school level characterization. That being said the latest ‘former, Age of Extinction, is never boring. How could it be? Bay is relentless, constantly cramming his frame full of visual overkill and political ad iconography. When the giant alien robots fight, everything is all right. When they don’t it’s dull… dull… dull.

It’s been several years since “The Attack on Chicago” with all its implied post-9/11 jingoism. In the CIA, agent Harold Attinger (Kelsey Grammer) has made it his goal to rid the planet of the “Transformer terrorist threat.” In league with evil entrepreneur Joshua Joyce (Stanley Tucci), his plan is simple — round up the Autobots and Decepticons, “decommission” them (with extreme prejudice), and then melt down the husks to extract a new high tech metal called “Transformium.” With it, the U.S. government can then build its own shapeshifting robot army.

In the meantime, engineer and inventor Cade Yeager (Mark Wahlberg) is struggling to raise his teen daughter Tessa (Nicola Peltz) while making a go of a parts salvage/repair business. When he comes across an abandoned truck, he believes he’s discovered something important. When it turns out to be Optimus Prime in hiding, things go from dull to dangerous for the Yeager family. Oh, and did we mention Tessa’s car-racing boyfriend (Jack Reynor), a discovery that changes the science regarding the extinction of the dinosaurs, and a new threat from an intergalactic mercenary bent on finding something called “the Seed?”

With its present-day paranoia subtext and brand new ‘bots, Transformers: Age of Extinction may feel like a legitimate reboot, but it’s not. It’s just parts of the previous trilogy tossed together, gleaned from the best stuff Bay and his immense CG army have to offer while simultaneously repeating many of the former films’ known mistakes. At 165 minutes, it’s a long haul for a very short storyline. It takes forever before the first major machine-on-machine beatdown, and the beloved Dinobots (who don’t speak, FYI) are reserved for the two hour plus mark. In between is crap corporate conspiring, black ops B.S., and Wahlberg playing protective pappa to the point of exasperation. If we were his daughter, we’d dance on over to the arms of Mr. Reynor as well.

Replacing the previous LaBeouf-led squad was a smart move, but Bay and his screenwriter Ehren Kruger give the characters nothing but beats — the rebellious child beat, the well-meaning but smothering parent beat, the “family farm is going under and we need cash” beat. We understand their motives but said concerns are so cliche that they become meaningless. Since all audiences really want are computer generated critters kicking the crap out of each other, all Age of Extinction merely had to do was deliver wall to wall mayhem. Instead, Bay modulates his money shot moments, waiting until the viewer is fed up with Peltz’s whining or Grammer’s scenery chewing before unleashing the beasts.

This makes for a mind-numbing experience, disorienting in its randomness and ridiculous in its brute force bombast. Even the final battle, animated F/X bouncing off the buildings of Hong Kong this time around, lacks the verve of the previous Windy City spectacle, all prehistoric protectors aside. The eye candy is more detailed and determined than before, but also too recognizable and rote. With more of the same equaling something similar at the box office, Transformers: Age of Extinction is virtually critic-proof. It’s film fast food for consumers incapable of judging celluloid quality… and they like it that way. 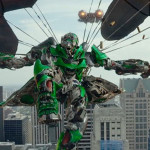 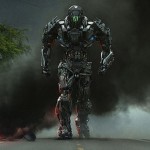 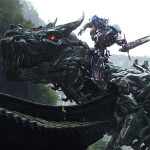 4 thoughts on “Transformers: Age of Extinction”