Shots!
Buy It From Amazon
Buy It On DVD
Buy It On Blu-Ray

The RomCom gets a reprieve from its status on cinematic Death Row with Trainwreck. Amy Schumer, this year’s humor “it” girl has crafted a brilliant starring vehicle that purposely encapsulates her activist/anarchist feminism, using the blonde bimbo stereotype (only smartened up, significantly) to make a statement about gender identity in 2015. This is a movie about a woman who drinks too much, does too many drugs, and sleeps with too many men. This is also a film about growing up, about leaving your party days behind to embrace the more adult concepts that come with age.

Under the determined direction of Judd Apatow, Schumer plays Amy, a writer for a hip pop culture rag known as S’Nuff. Under the iron fist froth of her boss, Dianna (a terrific Tilda Swinton), she spends her days writing puff pieces and her nights bedding every dude she sees. While sort-of, kind-of committed to muscled jarhead Steven (John Cena, showing considerable comedy chops), she follows her father’s (Colin Quinn) mantra that monogamy is impossible. In fact, it’s Amy who leaves before the first light of dawn, desperate to avoid any stand longer than a single night.

As part of a story pitch, she meets up with sports doctor Aaron Conners (Bill Hader). Instantly likeable, they fall for each other almost immediately. This throws Amy off as she sees any kind of commitment as a reflection of her sister’s (Brie Larson) stilted suburban life. Eventually, their budding relationship faces the usual crisis points we expect in a film like this — her wild ways, his desire for them to move beyond dating — and it all ends up flying apart. Will they get back together, or will Schumer’s script make the smarter, more unpredictable choice and go in a different direction? Well, this is a summer comedy, after all…

Trainwreck is indeed terrific. It’s a view of the man/woman thing that we usually don’t get to see. Sure, there are ladies in movies like this who avoid obligation and offer a glimpse at a mindset bent on having fun and staying single, but they are usually the sidekick, the smart aleck Greek chorus to the lead’s lack of confidence. Here, Schumer shifts the dynamic, turning her character into the fun girl and the rest of her circle of friends and family into honest voices of reason. It is Hader’s decent doc who wants to settle down and stop worrying about being alone. Because Amy falls as well, it reveals a crack in her public persona that argues for a lot of private pain.

Trainwreck also twists the entire RomCom premise by setting its story in the world of professional sports. LeBron James plays himself as Aaron’s BFF, and he’s terrific. His byplay with Hader is hilarious, if only for exposing how the world sees one of the most gifted basketball players of all time. Schumer’s script trades on that, as well as the buff machismo of Cena’s gym rat. Guys can walk into this movie and not worry about being overwhelmed with hearts and flowers. Instead, Trainwreck takes us courtside to make sure that, while the ladies are loving the message, the dudes are enjoying their ESPN eye candy.

Apatow handles it all with his usual scattershot aplomb. Since the movie promises to combine heart with hilarity, we don’t mind when the laugh track dies down for something more emotional or serious. He casts the film well, with Swinton showing that she’s more than an eccentric actress with an androgynous appeal. She is beautiful here, embodying everything you expect from an uptight British magazine editor. Her presence alone proves Trainwreck‘s specialness. It’s not every day that an Oscar winner signs up for what is basically a cruel joke machine, but she makes it work.

In fact, all of Trainwreck works, the home runs and the sacrifice flies. As an introduction to Schumer and her big screen potential, as well as an example of comedy in 2015, it’s a winner. 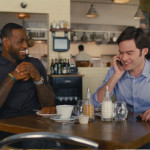 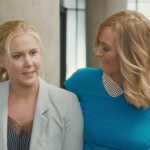 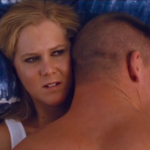 One thought on “Trainwreck”