Let's get physical.
Buy It From Amazon
Buy It On DVD
Buy It On Blu-Ray

Touchy Feely never gets its arms around its narrative, failing to massage any of its meandering plot strings into anything of substance. What’s put on screen by writer/director Lynn Shelton feels like a first draft or even a rough outline of themes and ideas that are nowhere near fully realized. She’s shooting to fit the film into a New Agey groove, hoping to get by with a quiet quirkiness rather than true emotional resonance. It doesn’t work, and while a solid cast puts forth a fine effort, they just can’t overcome the scattered story.

Rosemarie DeWitt stars as Abby, a masseuse who is stricken with a sudden aversion to touching her clients’ – or anyone’s – skin. The affliction hits after her boyfriend Jesse (Scoot McNairy) suggests they move in together. Though Abby agrees verbally, her slow pace in packing up her apartment proves her reluctance. Meanwhile, Abby’s repressed, buttoned-down brother Paul (Josh Pais) seems to garner the magical ability to cure TMJ at his failing dental practice, resulting in a rush of new clients. His newfound skills lead him to Abby’s Reiki advisor Bronwyn (Allison Janney) to learn the ways of spiritual healing, the pair forging an unlikely bond. Coming out of his shell, Paul may finally be able to cut the cord and allow his grown daughter and unhappy dental assistant Jenny (Ellen Page) to follow her dreams at culinary school.

See what I mean by scattered? There’s a lot of premise here, and admittedly some promise in tracking the regression of outgoing and personable Abby against the social evolution of meek dentist Paul. Shelton has an ear for how her characters talk and an eye for how they should carry themselves in their many uncomfortable interactions, but those words and actions don’t lead to anything insightful. DeWitt is a luminous screen presence, but Abby’s whiny vanity is unbecoming and makes spending time with her a real drag. If there is a standout it would have to be Pais as Paul, though he may be too perfectly cast, his quiet, aw-shucks manner of speaking quickly growing old to the point of being grating. Page is given little to do besides stare in anguished disbelief at her uptight father or stare longingly at Jesse, revealing an obvious crush.

The characters all start down a road to catharsis, but Shelton is unsure on how to get them to their final destination. Jesse and Jenny listen to some sad music and have a good cry. Worse are the breakthroughs of Abby and Paul, made by way of ecstasy pills supplied by Bronwyn. Under the influence of MDMA, Abby (literally) reaches out to touch an old flame (a weird and almost otherworldly appearance by Ron Livingston), while Paul lets loose on a dance floor full of hipsters. I have no idea how this helps either of them, but apparently it does. So remember kids, if you’re looking to take a shortcut to solve your deep emotional issues, drop some ecstasy as soon as possible.

It’s obvious that Shelton is fond of her characters and is content just passing time in their presence, but unfortunately for the audience that’s not enough. Lack of real conflict or an interesting arc for any of the petty personalities reduces Touchy Feely to an ineffectual, hollow grind. 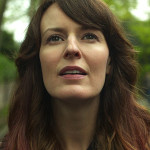 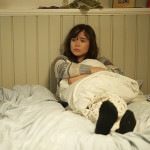 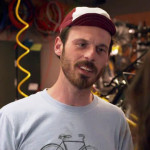