Katniss who?
Buy It From Amazon
Buy It On Blu-Ray

A 22-year-old video game character gets an exhilarating reintroduction in Tomb Raider, a type of origin story about a bright young woman who seeks her way in the world while on a mysterious search for her father.

We first meet Lara Croft (Alicia Vikander) fighting in a gym—and losing. She slaps the mat over having to yield. She wants to be capable, successful, but she’s just not there yet—one of the pleasant surprises this film has in store.

In the gaming world, Lara Croft is a like a British female version of Indiana Jones: highly athletic, intelligent, and beautiful. She’s a globe-trotting heiress archaeologist who plunges into one adventure after another, as famous for her typical outfit—a tank top and shorts with a holster strapped to each leg—as much as for her exaggerated hourglass figure.

But here, like the 2013 reboot of her famous gaming franchise, Lara is untested, even vulnerable. She grunts with exertion as she runs out of harm’s way, looks shaken after killing someone in self-defense, even bleeds.

Lara could be an heiress if she’d sign papers declaring her billionaire father (Dominic West of TV’s The Affair and The Wire) dead after seven years, but she can’t bring herself to say he’s gone. Instead, she works as a courier, delivering food and packages on her bicycle. To earn extra money, she offers to be the fox, or target, in a hunt with other couriers chasing her around the streets of London. She’s wilier than they expect and yet unlucky, crashing into a police car.

Ana (Kristin Scott Thomas), a business colleague, urges her to sign the papers so that her father’s company and legacy isn’t sold. But Richard Croft left a puzzle box for his daughter in the event of his death. Once Lara opens it, she finds a lead to his last destination and sets out to find him.

Vikander (Ex Machina, The Danish Girl) is eminently relatable as Lara, who doesn’t have or want everything in life handed to her. She’s caring yet tart-tongued, brave but unsure of what to do with her life. Much like the puzzles she loves, she hasn’t hit on the right combination yet.

Richard Croft became obsessed with Himiko, a Japanese queen said to rule by dark magic. Her tomb is on an unnamed island in the Devil Sea. Richard Croft chartered a boat there, so Lara convinces the captain’s son, Lu (Daniel Wu), also a sailor, to retrace their journey. Wu, of TV’s Into the Badlands, proves a supportive foil as he and Lara bond over their missing dads.

Naturally, there’s a curse associated with Himiko’s tomb, along with great power, something that Mathias Vogel (Walton Goggins, TV’s Justified, Maze Runner: The Death Cure) seeks for an unnamed boss. (He underestimates Lara, calling her “little girl.”) The film is a bit fuzzy on the corporation that wants to control the supernatural for nefarious ends, an antagonist type that’s been around at least since Raiders of the Lost Ark.

But that’s a small flaw in the script by newcomer Geneva Robertson-Dworet (the upcoming Captain Marvel) and Alastair Siddons (Trespass Against Us). They establish Lara firmly as a character of action—someone understood by what she does, instead of other characters talking about her. Lara doesn’t buy into all this magic talk; she’s too determined to find out what happened to her father and stay alive.

Norwegian director Roar Uthaug (The Wave) frames the action so it’s easy to follow, the better to appreciate fast-paced scenarios like Lara dodging hooligans across a Hong Kong marina. He also shoots close enough to see resolve quash her fear when a rusted cockpit creaks under her weight and she reaches for a parachute.

Angelina Jolie in 2001’s Lara Croft: Tomb Raider bungee jumped inside her mansion in silk pajamas, a film that flaunted her sexuality. This Lara is sexy without obvious eye candy.

“Some men like dangerous women,” Lu says, taking a guess at what spurred Richard Croft’s quest.

“Some men are fools,” Lara says.

She might struggle, but she’d rather forge her own path. That’s a joy to see. 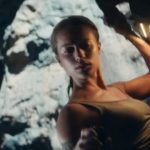 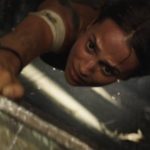 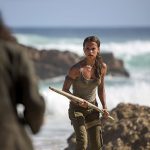