This Is Where I Leave You
By: Paul Brenner

This is where I squeeze you.
Buy It From Amazon
Buy It On DVD
Buy It On Blu-Ray
Buy The Book

One of the standard slapstick gestures employed by Three Stooges nemesis Vernon Dent in a multitude of Stooges films is the overarching group slap which Dent employed as both an act of chagrin and as a move of economy, raining down an across-the-puss blow in a three-in-one thwacking upon Moe, Larry, and Curly. Too bad Dent isn’t around today to inflict that same pain upon the all-star ensemble cast (Jason Bateman, Tina Fey, Jane Fonda, Adam Driver, Rose Byrne, Corey Stall, Kathryn Hahn, Connie Britton, Timothy Olyphant) of Shawn Levy’s dramedy This Is Where I Leave You. And you can include Levy as an end man in the group slap.

With This Is Where I Leave You, Levy — helmer of such high grossing pablum for the masses as the Cheaper By the Dozen, The Pink Panther remakes, and the Night at the Museum franchise — seeks to take a seat at the grown-up table with his first R-rated film, attempting brow-knitting relevance and emotional catharsis. The result is R-rated pablum for masses where children 17 and under are accompanied by adults or guardians.

The point of departure for the sturm und drang is radio producer Judd Altman (Jason Bateman, a Tom Ewell for modern times), who discovers his wife Quinn (Abigail Spencer) being boffed bare-assed by rich and shallow radio celebrity Wade Beaufort (Dax Shepard). Crestfallen, Judd then gets it between the eyes when he receives a call from his bossypants sister Wendy (Fey), informing him that his father has just died. Despite the fact that his father was an atheist and his boob-inflated Mom (Fonda) is not Jewish, father’s last wish is for his unhappy grown up children, including the reluctant Judd, to sit shiva in the family home for a week of squabbles, confrontations, backbiting and, ultimately, emotional redressing and bonding.

Levy and screenwriter Jonathan Tropper (the film is based on his novel) set up the glib situations with stock-in-trade confrontations and resolutions, complete with cringe-worthy epiphanies (“I’m an asshole, Judd, but I’m not stupid.”), the meaningful sappiness rearing its head on cue when the sentimental and quiet piano music begins to tinkle on the soundtrack.

Bateman’s Judd gets the hardest hammering in the shooting gallery of “family issues.” Judd gets glass lodged in his head, falls on his back, and gets slugged by his brother, all because Judd is rather obviously set up as the man inheriting the mantel of his dead Dad. He is even told “You’re going to try to be a dad just like Dad.” And Judd takes to announcing his banal personal revelations to all like a loose-lipped Scientologist: “I have never taken any chances. I spent my whole life playing it safe.” Where’s Eugene O’Neill when you need him?

In all this familial malarkey, Fonda comes off best, since for most of the film, she is the most comedic character of the bunch – even though her big boobs gag is put through the paces once every ten minutes. As for Tina Fey, she is acerbic and brittle, and Levy gives her an embarrassing crying scene that Fey will have to live with for the rest of her life.

At one point in the film, Fonda advices Fey, “It’s okay to cry. Or laugh.” Unfortunately, in the case of This Is Where I Leave You, none of those reactions come too easily. It is okay to snooze, however… 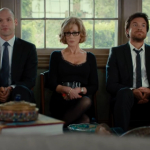 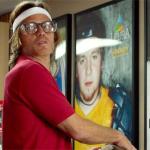 Would you buy a used hockey puck from this man?