They Came Together
By: Mike McGranaghan

You can't tell, but we're playing footsie under the table.
Buy It From Amazon
Buy It On DVD
Buy It On Blu-Ray

In the ’70s and ’80s, parodies were usually attempts to use humor as a way of poking fun at the clichés and conventions of various cinematic genres. Blazing Saddles mocked the self-serious tone of Westerns, Young Frankenstein lampooned the gloominess of vintage horror, and Airplane! mercilessly hammered the cheesiness of all-star disaster movies. Recent years have seen an unfortunate shift away from this Mad Magazine-inspired style. Current parodies like Meet the Spartans and The Starving Games are much lazier, resorting to non-stop visual name-checking of other, better films for their “jokes.” (“You remember The Hangover? Look — we’ve got a guy dressed like Zach Galifianakis!”). They Came Together is the newest parody to hit the screen, and it takes on an eternally ripe subject: the romantic comedy. With this film, director David Wain and co-writer Michael Showalter boldly reclaim the parody from the hands of its destructors, delivering an old-fashioned ribbing inspired by the work of Mel Brooks. In fact, should he see They Came Together, Brooks would probably be proud of Wain.

The movie opens with a dinner date. Joel (Paul Rudd) and Molly (Amy Poehler) are sharing a meal at a restaurant with friends Kyle (Bill Hader) and Karen (Ellie Kemper). The subject of how they got together comes up. Joel and Molly insist that their story is much like a romantic comedy. From there, They Came Together flashes back to tell their tale. Joel is a commitment-phobe who recently broke up with cheating girlfriend Tiffany (Cobie Smulders). Molly is a klutzy, perpetually unlucky-in-love gal. Taking a page from The Shop Around the Corner and You’ve Got Mail, she owns a small NYC candy store, while he works for a large candy conglomerate that wants to drive her out of business. They have a traditional “meet cute” when both show up for a blind date/costume party dressed as Benjamin Franklin. Of course, they hate each other immediately. Then fate intervenes to bring them together again, this time at a book store, and sparks fly. Almost every rom-com cliché is utilized and skewered in showing how their love blossoms, including the wacky “trying on different outfits before meeting up” music montage, the moment where the cheating ex-girlfriend makes a return visit at an inopportune time, and, of course, the bit where Joel must make a mad dash through the city to prevent Molly from marrying the wrong guy (Ed Helms) she foolishly agrees to wed after she and Joel have the inevitable breakup-before-makeup.

These are not spoilers, they are conventions, and They Came Together knows you’re familiar with every single one. Much of the fun in the movie comes from watching it march through predictable scenarios, only to puncture them with pointed wit. The breadth of humor on display is impressive. Some of it is raunchy; the movie contains the most graphically memorable comedic sex scene since Team America: World Police. Other times, it is of the absurdist variety. For instance, when Joel confesses his romantic woes to a sympathetic bartender, the exchange turns into a modern-day “Who’s on first?” routine that’s funny because it goes on far longer than you expect it to. Still other jokes are self-knowing. The characters in They Came Together often speak in dialogue that directly addresses the clichés they’re in the middle of enacting. In other words, they know they’re in a rom-com, so they openly discuss the very rom-com-ness of their predicaments. The film also has non sequiturs,puns, sight gags, potty humor, and even a couple moments of hilariously dark comedy. All of it is used to point out just how stale the modern big-screen romantic comedy has become.

In 2001, David Wain made the cult classic Wet Hot American Summer, which parodied summer camp comedies like Meatballs. He reassembles many of his cast members from that film, including Rudd and Poehler, but also Christopher Meloni (who plays Joel’s contentious boss), Ken Marino (as one of Joel’s basketball buddies), and Zak Orth, who gets a riotous cameo as a waiter with an unusual affliction. Because so many of the actors have worked together before — and worked with Wain — there is ample comedic synergy at work here. Everyone gets the material, knows how to sell it, and uses the group chemistry to put the jokes over the top. They Came Together is a fantastic example of how funny people on the same wavelength can create magic. There’s not a weak performance to be found anywhere.

Admittedly, Wain and crew could have gone nastier. In spite of the spoofing, there’s an underlying affection for romantic comedies running underneath the surface. As frequently hilarious as They Came Together is, one can only imagine what it would have been like had it taken the gloves all the way off, so to speak. They come off far enough to be great fun, though. Rom-coms have become the dullest, most predictable of cinematic genres, simply because so many of them are quite comfortable falling back on the same old formula, almost as though their screenplays were spit out by a computer that had analyzed other romantic comedies. If you’ve had a steady diet of movies starring Katherine Heigl, Kate Hudson, Josh Duhamel, or the pre-Renaissance Matthew McConaughey, you’ll appreciate the clever ways They Came Together disassembles the clichés, makes fun of them, and puts them back together in a new way. You’ll also laugh yourself silly. 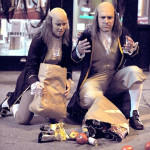 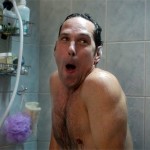 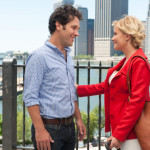