The Zookeeper’s Wife
By: Blake Crane

This is my third bike. Ahem.
Buy It From Amazon
Buy It On DVD
Buy It On Blu-Ray
Buy The Book

The Zookeeper’s Wife is based on a true story of extraordinary bravery and compassion in the face of evil. There is no doubt that the Polish couple at its center and the nearly 300 Jews they safeguarded during World War II are heroes. This particular profile in courage, however, loses a connection with its subjects in pedantic plotting. Despite maintaining a micro-level focus on specific characters during a time of global crisis and conflict, there’s a dramatic distance and familiarity with the film that, while honoring the history, keeps it feeling more perfunctory than poignant.

The story begins in 1939 Warsaw, where Jan Zabinski (Johan Heldenbergh) and his wife Antonia (Jessica Chastain) run – and live inside – the city’s zoo. The sunny days spent snuggling with lion cubs and making the rounds on her bicycle, with a baby camel running alongside, come to an end for Antonia when the Germans bomb the Polish capital. Soon after, the invading army sets up shop in the zoo, cruelly slaughtering scared animals.

Lutz Heck (Daniel Brühl), a German colleague and friend of the Zabinskis, changes out of his suit, into a Nazi officer’s uniform, and is re-introduced as “Hitler’s top zoologist.” To cement his dastardly turn, Heck guns down a bald eagle. Perhaps a bit of symbolism there, though Brühl is able to add a level of complexity to the vicious arrogance, encapsulating the Nazis without turning into a snarling villain. The character’s creepy attraction to Antonia is mined for expected uncomfortableness.

Under the guise of setting up their zoo as a pig farm to provide sustenance for occupying soldiers, Antonia and Jan begin an operation of rescuing Jews from Warsaw’s ghetto, using their property as a way station for escape. As is common with the script, following a conversation describing the detailed plan, the thematic implications are also plainly stated. Chastain, in a deeply committed Polish accent, muses, “A human zoo.”

Director Niki Caro doesn’t shy away from the horrors of war, painting an increasingly bleak picture over the seven years covered in the film. The zoo and its grounds decay and become overgrown, a place of wonder and discovery reduced to a dismal outpost for the Third Reich. Similarly, the ghetto deteriorates into a hellscape until it is liquidated and burned down. A young boy being housed underneath the zoo’s residence mistakes the swirling ash for snow. Caro effectively blends innocence with awfulness, creating haunting juxtapositions with subdued realism. In the makeshift subterranean shelter, children’s artwork on the walls serves as something akin to prehistoric cave drawings. The scrawl of pictures tells a tale, years in the making, with no words needed.

Moments of visual expressiveness, striking as they are, become swallowed up in choppy note-hitting for the characters. While it’s refreshing in a way that the grand context of the war is kept to a minimum, the focus on the individuals is disappointingly casual. The harrowing progression from the initial bombing, to occupation, to rescuing, to armed resistance, and, finally, to the war’s aftermath is too muted by calculated editing.

Chastain’s performance, even with the belabored accent, balances sorrow with hopefulness, projecting a struggle to maintain sanity amid the chaos. Yet she too is but a cog in the dramatic machine, lacking the layers for her arc to resonate deeply. A speech she gives to the brutalized and despondent Urszula (Shira Haas) is a highlight, contextualizing the stark realities of the moment while comforting the young girl. The catharsis that follows is simple while also feeling overwritten. And then it’s forgotten.

Several half-baked ideas and thinly-sketched characters weave their way into and out of the film. A man shows up at the former zoo out of nowhere, makes Jan’s operations in the ghetto easier, and then disappears. Later, Jan’s involvement in fighting the German’s more directly is arbitrarily used to set up a manipulative cliffhanger.

There’s tremendous power in this story, but the manufactured suspense, jittery pacing, and character journeys – both physical and emotional, dutifully expressed by The Zookeeper’s Wife fail to fully unlock it. 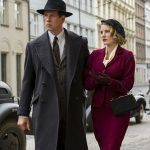 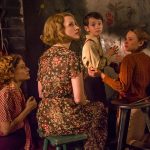 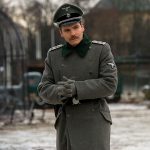