The Zero Theorem
By: Blake Crane

Every costume party needs a sad uncle fester.
Buy It From Amazon
Buy It On DVD
Buy It On Blu-Ray

As a vision of a dystopian future that comments on our present culture, The Zero Theorem feels immediately dated. The script from first-time screenwriter – and creative writing professor by trade – Pat Rushin is clinical and transparent in shallow explorations of ancillary themes like corporate machinations, physical and mental health care, fearmongering to drive political and consumer choices, and losing oneself in an artificial (virtual) existence. All of the fussiness is wrapped in the premise of one of us drones proving the pointlessness of it all; the kind of existential question we know from the beginning could never be answered satisfactorily. Packaged by Terry Gilliam, The Zero Theorem and its grand designs offer an extensive checklist of the director’s signature style, but little meaningful satire.

Qohen (Christoph Waltz) is a depressed worker bee at vaguely defined but evocatively-named corporation Mancom. He spends his days “crunching entities” while strapped to a work station that is part exercise bike and part videogame controller. We, and more importantly Qohen and his co-workers, never really understand what they’re doing or why they’re doing it, but apparently Qohen is quite good at meeting impossibly tight deadlines. He yearns to work from home, telling sociable yet aloof supervisor Joby (David Thewlis) he can be more efficient. The real reason for his request – aside from a non-diagnosed mental illness – is his fear of missing a phone call he believes will relay the meaning of life. After a seemingly chance meeting with Management (Matt Damon), Qohen gets his wish and is tasked with cracking the titular zero theorem, a complicated equation that will prove the significance, or insignificance, of existence.

When Qohen retreats to the confines of the sprawling, fire-damaged church he calls home, The Zero Theorem loses touch with the oppressive future society responsible for his disenchantment. Perhaps the tragedy of isolationism is part of the point, but the Orwellian big picture fades as the mania of a flat, non-sympathetic protagonist takes over. Waltz’s measured diction works wonderfully when reciting the lively prose of Quentin Tarantino (a pairing that has led to two well-deserved Oscars), but when laboring through the cheerless discourse here, it’s as artificial as the vials of colored liquid produced by Mancom. Qohen’s general despondence is conveniently defined by distinct physical (a total lack of body hair) and speech (constantly referring to himself in first-person plural) traits, but it’s plainly stated quirk for the sake of quirk.

It’s obvious Qohen lost (or never had) an identity in this corporate-driven world that values productivity over individuality, and we don’t need to spend nearly two hours reinforcing that fact as he uselessly attempts to prove the unprovable. During his futile quest more colorful characters pop in, including the underdeveloped Bainsley (Mélanie Thierry), a Hooker, or better, Webcam/Virtual Reality Sex Performer with a Heart of Gold offered up by Management, and the screenplay, for a requisite relationship diversion. Management’s teenage son Bob (Lucas Hedges) provides technical support and encouragement to push Qohen to a solution. Because it was required for Tilda Swinton to appear in a Terry Gilliam film while the actress and director were still making movies, she shows up as a (very) artificially intelligent psychiatrist, Dr. Shrink-Rom.

This idiosyncratic conglomerate lacks purpose and barely (and redundantly) feeds the thin story. How could the search for pointlessness in life be anything but sparse? The product of flawed design, The Zero Theorem is impossible to become emotionally invested in, and no amount of Gilliam’s fisheye lenses, Dutch angles, or low-fi future tech can distract from the treadworn trivialities masked as philosophical insight. 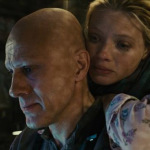 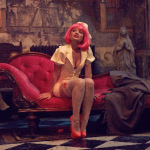 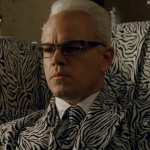