The Work
By: Norm Schrager

A world of hurt.

I can’t recall seeing a film that rumbles with as much rage as The Work, an exceptional documentary that takes place over four days within the confines of a large room at Folsom Prison in California. The film’s participants have an anger that sits somewhere beneath the surface, waiting to erupt at the slightest provocation. Here, that explosion of fury is encouraged—not just for inmates, but for the select civilians who’ve chosen to join them.

They’re taking part in a therapy program that integrates convicted criminals, guys from the outside, facilitators, and therapists. The setting is spare—just a big empty room with folding chairs—but the conversations get emotionally complex with alarming speed. Directors Jairus McLeary and Gethin Aldous spend just the right amount of time introducing the situation and a few men before letting the session take over the movie.

It’s a wise decision, because the therapy—doing “the work”—is a fascinating, often shocking, exercise. It usually begins with one man revealing a sanctum of emotional thought to the others, sorrows that are never expressed within his daily prison world. At that point, another group member faces him like a boxer at a weigh-in: eye-to-eye, unblinking, impenetrable, doing whatever must be done to encourage the subject to purge his feelings, in as safe a setting as possible.

Once the men find a way to unleash their own pains, the result is almost always frighteningly primal. Each guy screams through their fears and hatred as a half-dozen others physically hold him back or hold him down, for as long as it takes until he’s tuckered out or feels some level of clarity or resignation.

As group members take turns in the proverbial hot seat, there are two striking aspects to the presentation: The first is that McLeary and Gethin have mastered camera and mic placement, having previously attended the session before getting permission to film (McLeary had also been invited once by his own father); the second is that regardless of the level of screaming or physical intensity, the facilitators sitting outside the circle simply don’t flinch. They barely move. To them, this is normal, and you can imagine how many therapy sessions they’ve worked through and how much pain they’ve seen.

There’s some curious psychology involved here, submitted for your approval by the filmmakers without comment. Are some participants pushing themselves to their emotional depths because it’s expected as part of the therapy? Or perhaps because they know of its catharsis? These men are in prison exactly because they couldn’t comply—with social structure, with laws—but they’re model participants here, getting to the limits of their anger, no matter what it takes.

The wild cards here, oddly enough, are the few non-inmates. The quietest lets his colleagues know he’s not going to cry simply because it’s expected. Another suffers such pent-up self-hatred that he challenges an inmate during one session, an early shock that has the possibility of going south fast.

The common denominator appears to be the sins of the father. Nearly every guy involved in The Work talks about having a father that was abusive, inattentive, or gone. It’s a shared experience that says volumes about American familial ills and the roles of masculinity in society. When a civilian sadly wishes his dad didn’t shrug him off as a little boy when he offered to help in the garage, the story seems relatively slight, even silly. But even the most hardened criminal is there for this guy, forming a temporary family in an incredible gesture of respect. 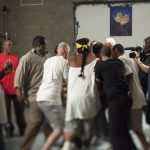 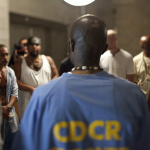 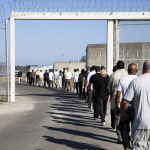