The Two Faces of January
By: Bill Gibron

It's all Greek to me.
Buy It From Amazon
Buy It On DVD
Buy It On Blu-Ray
Buy The Book

The transition from acclaimed screenwriter to equally adored director is a tricky one. Few manage the feat, and those who do seem stuck in a limbo between their previous profession and their newfound career. Take Hossein Amini, for example. Over the last two decades, he’s written arthouse hits (The Wings of a Dove, The Four Feathers), mainstream sleepers (Drive), and at least a couple of major misfires (Snow White and the Huntsman, 47 Ronin). Now he wants to take the chair behind the camera to bring The Two Faces of January to life. Based on Patricia Highsmith’s 1964 novel, it’s a Hitchcockian mystery with plenty of atmosphere and some significant plot twists. It’s also an indication that, while stylish and involving, Mr. Amini might not want to put that laptop away quite yet.

We are introduced to an American couple traveling abroad. He is Chester MacFarland (Viggo Mortensen), a con man who has swindled several of his clients back home. She is his unknowing wife Colette (Kirsten Dunst). While visiting Greece, they meet up with an ex-pat tour guide named Rydal (Oscar Isaac) who hustles tourists out of their cash. The trio form an instant bond, with Colette clearly falling for this mysterious new man. One night, Chester is confronted by Paul Vittorio (David Warshofsky), a private detective hired by the angry victims back home, and an incident occurs. Hoping for some help, he turns to Rydal, and soon, all three are purchasing fake passports and trying to stay one step ahead of the police.

When you go back through Ms. Highsmith’s creative canon, one can easily see the primary problem with The Two Faces of January. This is the woman who wrote Strangers on a Train (one of the Master of Suspense’s very, very best), as well as The Talented Mr. Ripley and Ripley’s Game. Her work, clearly inspired by the dime store pulp of her time, crackles with a kind of psychological intensity that this movie lacks. Amini gets the look and feel of this film right, but he doesn’t quite capture the sense of impending doom and dread that makes for a successful thriller. Instead, we can see the plot mechanics whirring away in the background, the need to get Character “A” over to where Character “B” is in order to establish motive and meaning. There is nothing organic about what happens, just a decent screenwriter trying to provide his direction with the material needed to move the story along.

Luckily, Amini hired three terrific actors to help with the process. Of them all, Isaac is the best, straddling the fine line between bad and benevolent with just enough believability on either side. We sense Rydal has another agenda simmering beneath the surface, and Isaac’s performance perfectly captures that dichotomy. Mortensen is also very good, though a bit too modern to completely pull off his circa 1962 persona. However, when tensions flare, he’s right there. Sadly, Ms. Dunst is given the least to do. There’s an odd moment, midway through, when we assume she and Isaac will finally fall into bed together. The scene is set, and then… nothing. No fire. No passion. We expect some fireworks, but just when he could create some, Amini fizzles. The same can be said for the finale, which tries (and fails) to milk suspense out of an ordinary foot chase.

So if The Two Faces of January is a referendum on whether or not Amini can make the leap from writer to auteur, the jury is still out. On the other hand, there is enough about the final product to make it an intriguing diversion — a not always successful one, but a relatively decent potboiler nonetheless. 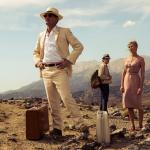 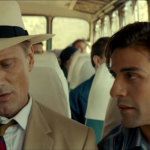 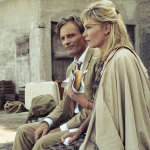