What we have here is a failure to communicate.
Buy It From Amazon
Buy It On DVD
Buy It On Blu-Ray

For a college student in the ‘80s and ‘90s who took Psychology 101 classes, one of the key moments of the semester was in studying the groundbreaking psychological experiments in social control and obedience to authority and watching the educational films that supported them. The granddaddy of these films, usually projected through a rickety, worn-out 16mm print, was Stanley Milgram’s Obedience, filmed through a hidden camera in 1962, in which Milgram, in a white lab coat, encourages subjects to increase electrical charges to a person in another room. As the charges increase, the unseen person screams in agonizing pain (the person is the other room is an actor). The subject, only following orders, obeys Milgram and keeps upping the electrocution jolts.

Another classroom favorite was chronicled in the films The Stanford Prison Experiment and Quiet Rage. In 1971, Philip Zimbardo, a professor at Stanford University, conducted a proposed two-week experiment during the summer break. Selecting 18 subjects by posting an ad in the local newspaper for participants in the experiment and willing to be paid $15 a day, Zimbardo and his staff selected his subjects — all white males — from Stanford students off for the summer needing the $15 per day offer. Zimbardo converted an abandoned dormitory floor into a makeshift prison and with the toss of a coin made half prisoners and half prison guards. Zimbardo discovered that the students too willingly accepted their roles as guards and prisoners, the guards readily turning into fascist tormentors and the prisoners equally ready to lapse into the role of powerless victims. So quickly and intensely did the students fall into their roles that Zimbardo had to cut off the experiment after six days.

Nothing much has changed in the last 45 years. The abuses at Abu Ghraib and the never-ending stream of police abuse starkly and chillingly demonstrate that abuse of authority continues unchecked and unchanged. Capturing the zeitgeist, we now have Kyle Patrick Alvarez’s The Stanford Prison Experiment, a dramatization of the Zimbardo experiment — an important film, capturing the mood of the ’70s but a mirror reflection of 2015.

Like the experiment itself, Alvarez and screenwriter Tim Talbott slyly ape the experiment’s protocol by not providing any back story about any of the participants in the experiment — the characters are as blank slates to the viewers as they were in the original experiment. And Jas Shelton’s cinematography is dank and constricting like the makeshift prison and, for anyone familiar with the original videos taken at the time by concealed cameras, the look and atmosphere of the original footage is captured impeccably.

Billy Crudup, who has dazzled on Broadway in The Pillowman and The Coast of Utopia but has been less successful in his film work, makes up for it here, turning Zimbardo into an evil genius, a Dr. Cyclops of psychological torture. Crudup’s look is on the money, his goatee is straight Zimbardo (Zimbardo has sported his goatee forever and even in his best days he always resembled an actor playing the devil in a road company version of Damn Yankees). The actors playing the guards and prisoners have their work cut out for them since without backstories they are playing without a net. Nevertheless, they invest their characters (instead of names, they are numbers) with soul. Standouts include Ezra Miller as a prisoner who bucks the guards and Michael Angarano as a seemingly nice guy who turns psychotic Nazi as a guard (as one character points out to him, “You look like the guy who kills Paul Newman in Cool Hand Luke”).

In The Stanford Prison Experiment, Alvarez pulls no punches, which at times make the film both tedious and difficult to watch. But that is as it should be. In this regressive world we live in, we need a film that is a kick in the groin instead of rubbish like Ant-Man. 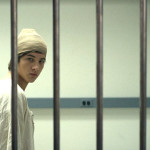 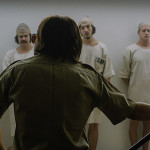