The Scribbler
By: Blake Crane

Orthodontics have gotten very complex.
Buy It From Amazon
Buy It On DVD
Buy It On Blu-Ray
Buy The Book

As comic book character names go, “The Scribbler” isn’t as inferential as, say, Wonder Woman. “Able to doodle at the speed of light (and backwards)!” doesn’t have the cachet of traditional super-human traits. That’s just fine because one thing The Scribbler definitely isn’t trying to be is traditional. Part batty superhero/villain origin story, part mystery thriller, and part empowerment tale, the film is stuffed with weirdness that sometimes sacrifices thematic depth, but it’s never bland. With a female protagonist battling mental illness in a highly stylized, fantastical environment, there are parallels with Zack Snyder’s Sucker Punch, only there’s a much smaller budget and much less that sucks.

Suki (Katie Cassidy) suffers from Dissociative Identity Disorder and is undergoing an experimental treatment called “The Siamese Burn,” in which she’s hooked up to a machine that eradicates her superfluous personalities. Given a (wonderfully ridiculous) version of the machine to use on her own at home, she moves into a halfway house of sorts – a dilapidated apartment building filled with other mental health patients. They include Cleo (Gina Gershon), who dresses like a pharaoh and roams the halls with a python wrapped around her body, extremely emo Alice (Michelle Trachtenberg), and Bunny (a bunny ear-wearing Sasha Grey). Hogan (Garrett Dillahunt), the sole male resident, finagled his way into the building and uses it as a speed-“dating” playground. Shortly after Suki moves in, people start falling to their deaths, and she’s questioned by Detective Moss (Michael Imperioli) and a criminal psychologist (Eliza Dushku). Moss is convinced Suki’s a murderer; Suki is afraid it could be the work of The Scribbler – a repressed personality of hers that leaves cryptic backwards messages during the various “burn” sessions.

Based on a 2006 graphic novel by Dan Schaffer, who also penned the screenplay, The Scribbler is somewhat scatterbrained in its examination of Suki’s mental state and the investigation of the deaths, constantly chasing down the next bit of cleverly constructed dialogue or visual trick. Scatterbrained is good (and fitting) when director John Suits frenetically establishes the look and feel of the apartment complex and its varied denizens, not good when cutting away to overly contrived images like several shots of a goldfish in a jar. The structure is also a bit unwieldy, jumping between the interrogation, exchanges between apartment-dwellers, and back to Suki’s past treatments with Doctor Sinclair (Billy Campbell), but bursts of wackiness help keep up momentum.

Also holding things together is Cassidy in a revelatory performance as Suki. The gorgeous, clean-cut young actress doesn’t just rely on a punky wardrobe to define the role. She’s believably tough and vulnerable when required and gives Suki a collection of tics that transcend the complicated character’s description. Cassidy owns the film in every bizarre situation, from a sex scene with Dillahunt that needs to be seen to be believed, to interactions with an English bulldog she hears speaking in a thick accent. Don’t ask.

Supporting players slip into their parts effectively. Dillahunt injects naïve virtue into Hogan that offsets his skeeviness, and Trachtenberg makes an impression with limited screen time. Everyone’s in on the insolence and has fun with it. This is science fiction that doesn’t fuss over the science – we never get insight into how “The Siamese Burn” actually works, it’s more concerned about the off-kilter fantasy that keeps us engaged. While it’s not always graceful in its considerations of mental illness or its explanations of narrative mysteries, The Scribbler has uncommon personality.

The Scribbler Blu-ray has solid video and audio quality, but unfortunately the only special feature is the trailer. It would be interesting to see deleted scenes that were too weird (or maybe not weird enough) to make the final cut. 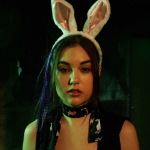 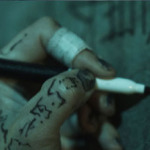 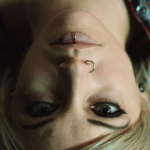