The Prosecution of an American President
By: Paul Brenner

My Aunt is around here somewhere.
Buy It From Amazon
Buy It On DVD

“Ye shall know the truth as I see it, and my truth shall make you free.” This is the battle cry of slanted documentary filmmakers from the left and the right, from Michael Moore to Dinesh D’Souza. And now into this errant froth can be added Vincent Bugliosi and his Boswells, directors David A. Burke and Dave Hagen with his passionate diatribe The Prosecution of an American President.

Bugliosi’s claim to immortal fame comes from his 1970 prosecution and conviction of Charles Manson for the horrific 1969 murders of Sharon Tate, Leno and Rosemary LaBianca, and others. The sensational murder trial and conviction became an equally sensational book by Bugliosi and a perennial bestseller ever since.

In The Prosecution of an American President, Bugliosi sinks his prosecutorial chops into the backside of George W. Bush and his underhanded success in selling the war in Iraq to the U.S. Congress and the American public, taking advantage of a climate of fear engendered by the 9/11 attacks. The unique take of the film is Bugliosi treating the 2003 invasion of Iraq as if he were a prosecutor in a murder case where George W. Bush is the defendant. “I don’t like to see anyone get away with murder. Much less over 100,000 murders,” declaims Bugliosi.

Bugliosi’s charges against Bush boils down to two lies perpetrated by Bush: (1.) Saddam Hussein was an imminent threat to the security of the United States, and (2.) Hussein was involved in the 9/11 attacks on the World Trade Center and the Pentagon. Bugliosi makes a convincing case that Bush deceived, fabricated, withheld, and ignored information that would have proven his rabid invasion of Iraq to be false. Because of that, Bugliosi cries out for local prosecutors and state attorney generals to charge Bush and other high level Bush administrators with the murders of American soldiers since the soldiers were victims killed under false pretenses in a false war.

Unfortunately, Bugliosi choses to present his case in the most false, phony, and manipulative way imaginable. We see shock photos of dying soldiers, war carnage, and dead children and then see shots of George W. Bush smirking, laughing, and enjoying himself. We have interviews with distraught parents whose sons have died in Iraq uttering statements like “George Bush killed my son” and “George Bush murdered my son.” Frank Capra-Why We Fight-like editing tricks abound (Bush’s announcement of the invasion of Iraq on March 19, 2003, where Bush declares, “Our nation enters this conflict reluctantly” has the phrase “reluctantly” repeated, repeated, and repeated). And then there is the dark, portentous musical underscoring that could have come from the latest Saw movie.

Bugliosi doesn’t help matters by giving us his ego-inflated resume for the first twenty minutes of the film. Bugliosi is seen in photos as a 16-year-old tennis champion, from his time in the army, as President of his graduating class, again at UCLA Law School, and prosecuting Manson. There are testimonials from F. Lee Bailey and Allan Dershowitz attesting to his greatness and blurbs of his bestsellers (“a book that will be read for centuries”). We see Bugliosi’s conviction successes (106 felony trials and 105 convictions). Hilariously, there is even a shot of Bugliosi in his study late at night, hitting the books, as he remarks about Bush and Iraq (“So I decided to investigate this case…”).

Personally, I am in Bugliosi’s court and fully expect to be sent to the camps when a right wing Republican administration takes over the White House. He doesn’t have to convince me. I am already sold. But if Bugliosi is seeking to convince old time Bush believers to come over to his way of thinking about the evils of Bush and the Iraq War, aside from attracting a collection of idiots and kooks, a strident and rubber-crutch-subtle documentary like The Prosecution of an American President is not the way to do it. This film reassures people who are already persuaded. This is not documentary. This is documentary masturbation. 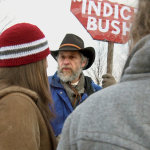 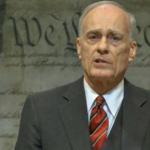 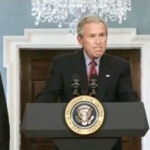