The Predator
By: Blake Crane

Where's Arnold?!
Buy It From Amazon
Buy It On DVD
Buy It On Blu-Ray

The Predator spends too much of its time hunting for ways to bring several uninteresting plot strings together and not nearly enough indulging in its throwback action swagger. Director Shane Black, who co-starred in the original Predator, and his co-writer Fred Dekker occasionally flash that renegade ‘80s attitude found in their beloved projects of yore – Lethal Weapon, The Last Boy Scout, and The Monster Squad – but much of the pep is swallowed up by plot-heavy modern blockbuster sensibilities that dull the experience.

Even the simple setup that’s in-line with the original film – a group of soldiers versus a master-hunter alien – is a chore to get through. Expert sniper Quinn McKenna (Boyd Holbrook) has a mission interrupted by a Predator that crash lands in the jungle. Before he’s scooped up for questioning by government agent Traeger (Sterling K. Brown), Quinn’s able to ship home some of the alien’s high-tech gear. It winds up in the hands of his tween son Rory (Jacob Tremblay), who is autistic. Both the Predator and Quinn eventually escape custody and the hunt through suburban streets (that are apparently very close to a clandestine government laboratory) and surrounding forests begins.

The journey to a final showdown is a long, bumpy one full of asides and a couple of brief, manufactured, lifeless action set pieces that take a backseat to boring, nonsensical over-explaining of everything. Biologist Casey (Olivia Munn) was brought in the fold to explain some DNA surprises found in the alien’s blood, but quickly becomes part of McKenna’s ragtag group of warriors, suddenly spouting tough wisecracks to go along with her scientific exposition. She covers such minutiae as the potential purpose of a Predator’s dreadlocks. Can’t anything just look cool anymore?

The poor construction of the patchwork narrative regularly shows its seams. There was obviously no need for Traeger to consult Casey in the first place because, finally, well over an hour into the movie he sits her down and lays everything out for her/us, including the reason for the arrival of a second 11-foot-tall, more highly evolved “Super-Predator”.

At least when Brown does it, it’s entertaining. He gives the standout fun performance, chomping gum while gleefully reciting some of Black and Dekker’s most inspired goofy dialogue. A running joke that begins with him and Munn debating the “Predator” moniker is some of the rare levity that works. Holbrook is more than serviceable as the flawed hero/one-liner mouthpiece, coming across as the right mix of sincere and outlandish.

That blend is completely absent from his gallery of sidekicks, which include Trevante Rhodes, Keegan-Michael Key, and Thomas Jane. Rhodes and Holbrook share an easy, cool-guy chemistry that gets overshadowed by the broadly-afflicted group of unstable antiheros. Members of the unit often come across as skeevy instead of witty. Key’s general craziness and Jane’s Tourette’s are always played for laughs, and the jokes land with such a low-percentage that it highlights the questionable portrayal of various disorders. Similar problems exist with Tremblay’s character, his autism used as both convenient plot device and an excuse for him to remain unaffected by the nuttiness occurring around him. A scene that starts out amusing enough, with him wearing a Predator’s gigantic face shield as a Halloween mask, is punctuated with head-scratching mean-spiritedness.

There’s so much going on with the humans, tiringly so, that the Predators themselves hardly register as threats. This being the fourth movie in the franchise, not including the two imprudent Alien vs. Predator films, the aura and appeal of the creature is already spread thin, and Black finds little (beyond a bigger size and more advanced tech) to build on the mystique. The creatures’ reasons for coming here (again) are also tired.

A wild final 20 minutes, led into with some more exposition and questionable character motivations, deliver action pleasures like wacky team dynamics and unique, well-rendered methods of evisceration, but by that point it hardly seems worth the trouble. The thrill of the hunt is long gone. 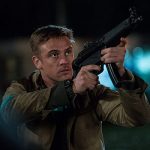 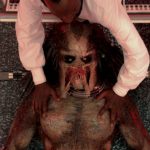 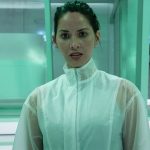