The Overnight
By: Paul Brenner

In the Woody Allen film Sleeper, a scientist informs Allen that his brain will be electronically simplified and Allen responds, “My brain? That’s my second favorite organ.” In defense of Woody Allen, why shouldn’t the penis take precedence over the brain? After all, it is an organ good at multi-tasking, has the ability to express itself, and, if all else fails, can be augmented with prescription drugs. Cinema has expressed its fun flute call through the ages — metaphorically, physically and even literally, from Rex Harrison’s subtle query in My Fair Lady, “Why can’t a woman be more like a man?” through Marlon Brando’s simple declarative statement in Last Tango in Paris, “That’s your happiness and my hap-penis.” But with the new hipster swinger comedy The Overnight, the schmeckel has now become the key motivator of plot, looming over and over-powering this slight, quirky revamp of Bob and Carol and Ted and Alice and Who’s Afraid of Virginia Woolf?

Taylor Schilling, Adam Scott, Judith Godreche, and Jason Schwartzman are two thirty-something couples saddled with young children. Alex (Scott) and Emily (Schilling) are recent Seattle transplants settling down in Los Angeles. After an establishing scene of Alex and Emily howling at failed sexual mechanics due to Alex’s pencil penis, they are seen now skirting the environs of a playground, watching over their little boy, who is happily playing with another little boy. Alex, like Casper the Friendly Ghost, is bemoaning their lack of friends when Kurt (Schwartzman) arrives at the playground, bedecked in a black Hasidic hipster get-up, like a clean-shaven extra in the Wedding Dance scene from Fiddler on the Roof. The other child is Kurt’s son. Kurt proceeds to introduces himself to Alex and Emily, and it doesn’t take long before he invites them for a pizza night to meet his wife Charlotte (Godreche). Alex and Emily happily accept and soon they are at Kurt and Charlotte’s mansion. The kids and the pizza are fun but the real fun begins when their kids fall asleep and Kurt invites them to stay overnight: “Only in America are does the child dictate when the night is over.” When Charlotte surreptitiously puts her hand onto Alex’s knee and then we are off to the races.

As the children gently slumber, the two couples inhale and the ensuing lack of inhibitions causes Alex to grieve over the size of his ding dong mcdork. This is the main source of complaint as the couples tiptoe around sexual dalliance. But ultimately nothing that the couples do or say has anything to do with sexual consummation. There is much talk (Charlotte, alone with Emily in her bedroom remarks, “I really find myself craving feminine energy”) but no action. These non-escapades culminate in a scene by Kurt’s swimming pool where Kurt, revealing himself to be the proud owner of a Dirk Diggler-sized appendage, encourages Alex to be proud of what little he has (“I love my dick,” Alex declares) and to dance full frontal in front of the gals. After that, things get a bit sinister, especially a scene in which Charlotte takes Emily out for a drive in the middle of the night so that Charlotte can quickly satisfy a client in a sleazy massage parlor. But it is all coitus interruptus. Emily wants to go home while Adam wants to stay (“I am expanding tonight”).

Although the film is short (70 minutes), the film is tiresome and repetitive. The one saving grace is the gameness of the actors. Schilling, Scott, Schwartzman, and Godreche all invest personal gusto into the self conscious script by director Patrick Brice. The acting makes the film easier to digest but the film is not a coherent piece, playing like a collection of rejected Saturday Night Live sketches. And there is nothing worse that a film working overtime to be hip. Kurt Cobain’s adage “I’d rather be dead than cool” has its place here. Other than that, The Overnight is more like Schlong Day’s Journey Into Night. 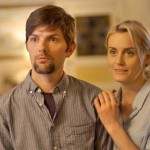 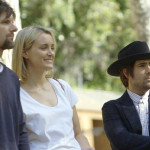 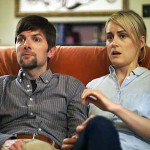