The Oogieloves in the Big Balloon Adventure
By: Mike McGranaghan

What's not to oogielove?
Buy It From Amazon
Buy It On DVD
Buy It On Blu-Ray
Buy The Soundtrack

There is nothing wrong with making a movie aimed at preschool children. However, there is something very wrong with making a movie aimed at preschool children that is as cynical and imaginatively bankrupt as The Oogieloves in the Big Balloon Adventure. It is the brainchild of Kenn Viselman, a marketing expert who helped turn Thomas the Tank Engine and the Teletubbies into kiddie sensations. Clearly designed with the intention of kicking off a merchandising phenomenon, the film instead became one of the most notorious bombs in box office history when it literally played to empty houses during its theatrical run. DVD feels like a more natural fit for the material, although the smaller scale format in no way improves the quality of what’s on screen.

The plot is naturally simplistic enough to be followed by four-year-olds. Goobie, Zoozie, and Toofie are the Oogieloves — colorful, large-headed felt creatures. They must retrieve five magical balloons in time for a birthday party being held in honor of their friend, a pillow named Schluufy. Each balloon they locate requires them to interact with an eccentric human, including an ice cream shop owner (Chazz Palminteri, certainly every preschool child’s favorite actor), a sneezy singer (Toni Braxton), a polka dot-loving grandmother (Cloris Leachman), and a couple of flamenco dancers (Christopher Lloyd and Jamie Pressly). Oogieloves is laid out as variations on the same pattern: the characters meet a person, perform a musical number, grab the balloon, and move on. The big idea here is that the movie is interactive. Every few minutes, young viewers are prompted via on-screen text to either stand up and dance, or sit down and be quiet. It becomes extremely monotonous, watching the Oogieloves go through the same motions and seeing the same prompts pop up again and again. After a while, it all starts to feel like some Kafkaesque nightmare.

A major part of the problem with The Oogieloves in the Big Balloon Adventure is that the Oogieloves themselves are completely indistinguishable, except for the fact that Toofie inexplicably drops his pants at the end of each section. (When he does, the other characters repeat the refrain, Goofy Toofie, pick up your pants! Any adult unlucky enough to watch this movie will undoubtedly start to think that Toofie might be a pervert after the third or fourth time.) They have no true individualism, so it’s impossible to develop any sort of affection for them. Barney the Dinosaur, who seems to have been a direct influence, at least had a personality, no matter how annoying it may have been. The supporting characters fare no better. There’s a talking window, a goldfish, and a Hoover vacuum cleaner named J. Edgar (get it?). Not too much magical going on here, although the vacuum cleaner is an apt metaphor for a movie that sucks this badly.

Perhaps the most objectionable thing about The Oogieloves is that it’s often unintentionally creepy. With their dead eyes and one character’s propensity for dropping trou, The Oogieloves are intensely off-putting. Without a doubt, though, the creepiest element is the character of Bobby Wobbly, as played by Cary Elwes. He’s supposed to be a funny chap who loves bubbles and can’t stop bouncing. In reality, Elwes goes so far over the top with Bobby that he takes on an almost sinister dimension. In fairness, this is also the only part of the film worth seeing. It’s exceedingly rare to have the opportunity to watch an actor so brazenly embarrass himself. Elwes, who makes bizarre faces as he continually wobbles about, is forced to sing a ludicrous song (“Wobble bobble all around and give your tush a pat!”) and ride a hobby horse. There’s no politically correct way to put this, so let’s just say that Elwes should have heeded the advice Robert Downey, Jr. memorably gave Ben Stiller in Tropic Thunder. Whereas the other stars merely look humiliated to have reached the kind of career low that necessitates being part of a movie like this, Elwes wants so hard to make little kids laugh that he ends up appearing deranged.

There are few films aimed specifically at a preschool audience, but there are plenty that can be enjoyed by kids that age. Disney, Pixar, and DreamWorks have been pumping them out regularly for years. This being the case, there’s no reason to make your children endure The Oogieloves in the Big Balloon Adventure. Nothing here is clever or inventive enough to capture their imagination, while the combination of repetitive storytelling, cheap-o aesthetics, and unintentional creepiness makes it excruciating for anyone over the age of five. 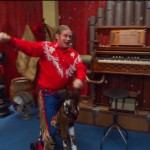 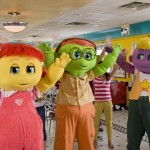 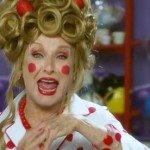 One thought on “The Oogieloves in the Big Balloon Adventure”