The November Man
By: Bill Gibron

Don't ask about August!
Buy It From Amazon
Buy It On DVD
Buy It On Blu-Ray
Buy The Book

Everyone knows the story of how, in 1987, Pierce Brosnan was poised to take over the role of James Bond from Roger Moore. His TV show Remington Steele had been canceled and producer Albert R. “Cubby” Broccoli personally offered him the gig, only to have the surrounding publicity revive said series. NBC would not let him out of his contract, which caused the production to have to look for another 007 (it ended up being Timothy Dalton).

It wasn’t until 1995 when the Irish actor would take over the part, producing four hit films in the series. Eventually replaced by Daniel Craig, Brosnan then went looking for another spy franchise to star in. He hit upon The November Man, by writer Bill Granger, and was all set to star in a series of films based on the books when, as luck would have it, the first movie was abruptly cancelled.

Now, some seven years later, Brosnan is back in November territory and it definitely was worth the wait. Kind of. An old fashioned throwback to the days where spies were smart and used their brains more than their brawn, the story centers on a Russian politician named Arkady Fedorov (Lazar Ristovski). Accused of war crimes, he has sent a hired assassin to destroy the trail of evidence leading back to him.

Brosnan is Peter Devereaux, an ex-CIA agent who is pulled out of retirement by his old friend Hanley (Bill Smitrovich). His mission: retrieve valuable information on Federov from an old flame. When she ends up dead, Devereaux must play a game of cat and mouse with the young gun he helped train (Luke Bracey) while trying to locate a Chechen refugee. All paths lead to a Serbian social worker with a secret (Olga Kurylenko, also a Bond alumnus).

With a plot so filled with double crosses it threatens to lap itself and an action strategy which sees several confrontations ended via the old “unseen assailant around the corner” gag, The November Man aims to revive Brosnan’s hero fortunes while providing adults and other members of the “older” demographic with something a bit more “their speed.” Unlike the typical, current espionage flick which throws in as much high tech mumbo jumbo as possible while shaking the camera within an inch of its life, this movie relies on the “smartest guy in the room” motif to make us care.

Brosnan’s Devereaux is indeed clever, constantly outwitting everyone who’s after him. He relishes in it. While not given much of a backstory, we still indentify with his desire for personal and professional payback. He stands on the side of right while the rest of this post-millennial spy world struggles in ambiguity. As his young protege, Bracey is barely a presence, however. He simply disappears into the woodwork, never once registering as someone we should root for or care about. The baddies are boisterous in their red herring redundancy, and the hitwoman hired by the Russians is a laughable caricature of what such a dressed all in black danger babe would be.

And yet Roger Donaldson, director of such films as No Way Out and Thirteen Days finds a way to make it work — mostly. He has to overcome convoluted plotting and lack of strong female characters and yet he still keeps us interested and engaged. Granted, a lot of this is inferred entertainment, our previous connections to Brosnan and Bond helping out here and there, but The November Man also argues for a time when talent would trump technique. We don’t get overblown stunts and/or CG splash, just the occasional slow-mo blood spray and lots of nostalgic secret agent posturing.

Oddly enough, a sequel has already been greenlit for this yet-to-prove-itself effort, and that makes sense. Around the world, movies like The November Man are an easy sell. While the story may struggle to make sense, it’s the star that everyone understands. 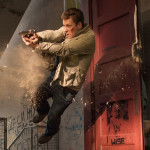 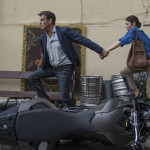 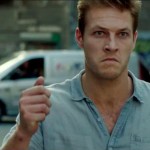 One thought on “The November Man”