The Marvel Cinematic Universe Is Evil and Needs to Die
By: Mike McGranaghan

And you thought I was evil!

Marvel Studios has, for the past several years, been carrying out one of the most ambitious projects ever attempted in cinema. Under the direction of studio president Kevin Feige, they have been attempting to replicate the interconnectedness of their comics via the “Marvel Cinematic Universe,” or MCU. The original idea was simple, yet brilliant: produce a slew of superhero movies that all take place in the same world, and where heroes from one picture might cross over into another. They would, essentially, all feel very similar. On the surface, the plan seems to be working brilliantly. Marvel has cranked out hit after hit, from the truly brilliant (Guardians of the Galaxy) to the reasonably sort-of okay (Thor: The Dark World). To date, they haven’t had what anyone would term an outright flop, and their first Avengers movie is one of the highest-grossing pictures of all time.

Look a little deeper, though, and you can see an unmistakable dark side. To mix metaphors, the MCU has quietly turned into the Death Star, and Darth Feige is pointing his lasers at all us helpless moviegoers on Alderaan. So let’s just say it flat out: the Marvel Cinematic Universe is evil and needs to die.

While the concept of the MCU seems like nirvana to superhero fans (including this writer), there are some truly troubling problems with the way Marvel is carrying it out. For starters, they’re quashing the visions of great directors. The company has a habit of signing unique filmmakers to helm their pictures, only to force them to adhere substantially to Feige’s vision. Patty Jenkins (Monster) left Thor: The Dark World over the dreaded “creative differences,” and after two Iron Man pictures, Jon Favreau declined to return for the third. Instead, he wrote and directed Chef, a film that can easily be read as a metaphor for his Marvel-related frustrations. In this small personal project, Favreau himself plays a talented food artist who gets tired of being told what to feed the masses by a boss only concerned with profits. He responds by walking out and going to on create… a small personal project.

The most egregious example, though, is the situation with Edgar Wright. A visionary director with a distinct style, Wright earned a massive geek fanbase with pictures like Shaun of the Dead and Scott Pilgrim vs. the World. When Marvel signed him to write and direct Ant-Man, it was a fanboy’s dream come true. But Marvel and Feige didn’t like the ideas he had for the movie, which were reportedly, you know, unique and stylish. They wanted something that would fit into the MCU a little more cleanly, so Wright walked. Why, one could reasonably ask, would Marvel bring in someone like Wright, knowing the tone and form of his work, only to ask him to dial down the very uniqueness for which he was presumably hired? And, more importantly, how good will superhero movies be if filmmakers like Wright aren’t allowed to bring their own ideas to the table? What if he’d made the next game-changer? We’ll never know. 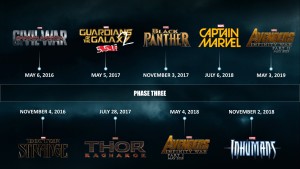 A second problem is that Marvel movies can no longer just be about themselves. They have to be about the entire Universe. The company maps out the “phases” of the MCU years in advance. They know which movies will be made, which characters introduced, and how everything will cross over into everything else. As of this writing, they have movies mapped out through 2019. Several of these future pictures don’t even have a script, a director, or stars yet, but Marvel knows precisely how they will fit into the MCU. It’s kind of like being 12 years old and saying, “By the time I’m 30, I want to be a doctor making $300,000 a year, have a spouse and three kids, live in a two-story house in the suburbs, and drive a Mercedes-Benz.” When everything is so uber-planned in advance, there’s precious little room for spontaneity or surprise.

The connective tissue between Marvel projects typically comes in the form of “credit cookies” — short post-credit scenes that provide a glimpse of where the current phase is heading. But since at least 50% of the audience doesn’t get the references anyway, there isn’t a whole lot of justification for connecting everything in the first place. Avengers: Age of Ultron is a prime example of how the MCU is harming itself through such connectivity. The film not only has to pay off things set up in previous Phase 2 movies, it also has to introduce new characters and scenarios that will pay off years from now. Lo and behold, reviews and box office, while good, are still far below the first Avengers adventure. What should have been a tight good-versus-evil story is instead chock full of stuff that will pertain more to some future movie than it does to this one.

The third, and final, major issue is that Marvel’s extraordinary box office success is changing the way all superhero movies are made. Wanting a piece of the sizable box office action, DC is now following Marvel’s lead. They’re mapping an outline for many of their popular comic book characters to hit the screen. Next year will bring us Batman vs. Superman: Dawn of Justice, which has their two most beloved characters facing off onscreen, and Suicide Squad, a story featuring an ensemble of DC-related villains. A Justice League film is also reportedly in development.  That’s right, they’re connecting all their characters into the same world, too. So now, not only is Marvel making all their own movies to fit a very specific template, they’re also inspiring their rival company to adhere to the exact same template. Things look bleak for originality.

None of this is meant to suggest that Marvel movies are not good. Again, they’ve produced no turkeys to this point. Still, one has to wonder if the moviegoing public will still feel as enthusiastic by the time Phase 3 ends in a few years. The way things are progressing, there’s every reason to believe that the homogeneity of the MCU will cause the superhero genre to burn out as brightly as it was first lit. That would be a shame for everyone who cares about having quality superhero movies far down the road.

The Marvel Cinematic Universe is evil. It needs to die so that risk-taking and innovation can thrive.