The Magnificent Seven (2016)
By: Blake Crane

Turns out we do need stinking badges.
Buy It From Amazon
Buy It On DVD
Buy It On Blu-Ray

As it goes with Antoine Fuqua’s features, masculinity and morality are at the forefront of The Magnificent Seven. It would seem, then, that a cast full of compelling actors and material derived from Akira Kurosawa and John Sturges would be a perfect fit for the director’s sensibilities. However, this updated take not only lacks the emotional heft of Seven Samurai and the fun of 1960’s Magnificent Seven, it also fails to rise to Fuqua’s usual level of testosterone or lower to his depictions of ethical depravity.

Some of the action may push the PG-13 rating and screenwriters Richard Wenk and Nic Pizzolatto may hint at larger existential dilemmas, but the slickly directed and dutifully written film is a shell. It simply goes through the necessary steps to assemble a team for an impossible mission without much purpose or urgency, even for a Western morality play. If there is a deeper meaning to the conflict for some of the participants, it’s revealed much too late and with much too little substance to make a big impression.

The struggle begins with threats from villainous robber baron Bartholomew Bogue (Peter Sarsgaard) – because when you live in the American West in 1879 and your name is Bartholomew Bogue “robber baron” is your obvious vocational choice. He terrorizes the fine people of Rose Creek and burns down their church, giving them a deadline to sell their mineral-rich land for pennies on the dollar, “or else.” Looking to save her town, Emma (Haley Bennett) recruits upstanding warrant officer Sam Chisolm (Denzel Washington) to help.

After agreeing to stand up to Bogue, Chisolm sets out to round up a crew. He finds six uninteresting caricatures. First up is heavy drinking gambler Faraday (Chris Pratt, his natural charisma drained from focusing too hard on an Old West drawl and overwritten gags involving his trusty deck of playing cards). Also joining the group are ex-Confederate sharpshooter Goodnight Robicheaux (Ethan Hawke) and his knife-wielding associate Billy Rocks (Byung-hun Lee), Mexican outlaw Vasquez (Manuel Garcia-Rulfo), expert tracker Jack Horne (Vincent D’Onofrio), and Red Harvest (Martin Sensmeier), a Native American the other guys just happen to bump into on their way to Rose Creek.

Fuqua nor the screenwriters have much interest in providing depth or exploring the motivations of these men and the second act becomes a drawn out assemblage where personalities and skills never quite mesh. Washington and Pratt flash some chemistry, though Chisolm is so consistently and quietly macho there’s a lack of charm to the interplay. The richer history between Chisolm and PTSD-suffering Robicheaux is just as superficial.

The only one enjoying himself and injecting panache is Skarsgaard as the black-clad, over-the-top antagonist. His goatee may not be long enough to twirl, but he takes full advantage of limited opportunities to chew scenery. One of the film’s best scenes is a Bouge rant that’s intercut with a silhouette of Chisolm on his horse with a twilight, postcard-perfect frontier landscape behind him. Each man is shown first in long shot and finally in close-up, signaling the impeding confrontation. It’s also one of the few times the score from Simon Franglen and James Horner is felt.

Making less of an impact is the actual bloody confrontation between the seven and Bogue’s overwhelming force. Frenetic cutting between everyone’s hero shots and individual skirmishes make the life and death struggle feel as artificial as the immaculately built Wild West town. Despite the desert landscape surrounding it, Rose Creek always looks like a constructed set rather than fledgling settlement, especially when the symmetrically charred church is framed perfectly at the end of Main Street. The symbolism is as plain as the fresh paint on the saloon or the soft, clean blankets of dirt on the thoroughfare.

All that feels worn are the half-baked themes of righteousness and revenge tied up in Bogue’s cockeyed view of capitalism. Fears are overcome to stand up for what’s right, Red Harvest does battle with an adversary who’s on the wrong side of history, and so on. Washington and Skarsgaard do great work in their face-to-face, but their meeting is mostly explaining and getting from beat to beat, rather than playing out the emotional release organically. A stilted final narration over a phony backdrop is completely artificial, much like everything that had come before. 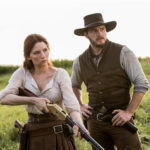 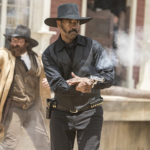 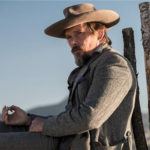