The Longest Ride
By: Bill Gibron

Is this the longest meal?
Buy It From Amazon
Buy It On DVD
Buy It On Blu-Ray
Buy The Book

Nicholas Sparks is the king of plot catalysts. Whenever his sloppy, manipulative narratives stall out, or run head first into a contextual dead ends, the (in)famous romance author just pulls another misdirecting rabbit out of his formulaic storyline hat. Take the latest big screen adaptation of one of his novels, The Longest Ride. After our contemporary couple’s love at first sight situation plays out, we quickly shift over to an aging man and his WWII-based story of love and art. And when that past parallel comes up cold, another element (a mistreated child) is tossed in. By the end, when the inevitable tragedy and “twist” arrive, we’re worn out, having been throttled by dozens of asides and tangents.

Our barely coherent tale begins with a college art major named Sophia (Britt Robertson) who is poised to graduate and move to NYC. Naturally, she goes to a professional bull riding competition and meets up with handsome hunk Luke Collins (Scott Eastwood, Clint’s kid). He’s trying to make a comeback after suffering a near-death experience a year before. One night, they come across a car accident. They manage to save the vehicle’s occupant — an old man named Ira Levinson (Alan Alda) — and a box full of old letters. When Sophia comes to visit, she asks to read them.

It is here where we learn of young Ira’s (Jack Huston) pre-War love affair with Austrian immigrant Ruth (Oona Chaplin) and his subsequent post-service situation. The two marry, but because of what happened to him in WWII, they are unable to have children. This puts a strain on their marriage, but Ruth’s love of art, her teaching, and her affection for an abused little boy seem to patch things up. As Sophia hears the stories, she realizes Luke is the one for her. But he has a medical secret, and won’t rest until he’s chased his career demons all the way to the top — or to the grave.

Before tearing apart this paltry excuse for a romance, let’s concentrate on the few things The Longest Ride gets right. First off, both of our leads do a good job of selling their particular story. Robertson and Eastwood might not have the most electrifying chemistry together, but we do buy them as a couple. Their love scenes are more cuddly than carnal, however. Also, director George Tillman, Jr. does an excellent job of setting mood and tone. His carefully framed shots of the North Carolina mountains and sun-dappled farms provide a dreamy fantasy-like backdrop to their growing love. Alda is also okay, though he’s burdened with being bedridden and broken most of the time.

What doesn’t work, however, is Ira’s bland backstory. When he meets Ruth, we don’t see the attraction. Ms. Chaplin (Charlie’s granddaughter, Geraldine’s daughter) has a whiny, irritating mannerism that makes her initial pronouncements of love, and her last act denouncement of same, come across as shrewish and ungrateful. The contemporary art angle appears to be nothing more than a set-up for the finale, and when the little boy shows up to take his place in the heart of this childless couple, he’s as inert and uninteresting as any other element in this full blown flashback fail. Indeed, the entire Ira aspect of this story could be cut and we’d have a much better movie. Sophia and Luke we like. Ira and Ruth we don’t.

The finale also falls apart, simply because we haven’t been properly prepared for such weird wish fulfillment. We know that Luke continues to ride, against doctor’s orders, because he needs money to save his family ranch (yes, that old chestnut is in here too) and Sophia abandons her potentially high paying career to be with him. So how will they live? Enter the dopey denouement. Had the filmmakers avoided the novel’s obvious pitfalls and simply given us the story of Sophia and Luke, we’d be happy. With all the other narrative froufrou added, The Longest Ride becomes just another Nicholas Sparks calamity. 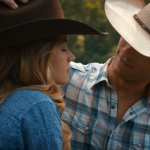 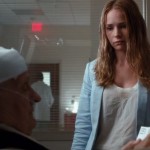 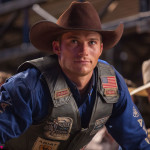 2 thoughts on “The Longest Ride”