The Little Hours
By: Blake Crane

They have bad habits.
Buy It From Amazon
Buy It On DVD
Buy It On Blu-Ray

The Little Hours sources a story from “The Decameron” and puts it through a Monty Python/Mel Brooks filter, using modern (and very foul) language to expose the goings-on at a 14th century Italian convent. While not as punchline-heavy as its most apparent comedic influences, writer/director Jeff Baena’s film works as a layered farce that doesn’t dig too deeply. Any statements about the church as an institution, religion, or repression are presented as plainly as the F-bombs flowing from the mouths of the convent’s vulgar nuns.

Though the “Bad Nuns” debauchery wears thin at times, an enjoyable ensemble more than carries the load for a tight 89 minutes, and even adds some humanity to the hyperbolic mischief.

Everyone at this nunnery is bored and/or unenthusiastic about being there. Fernanda (Aubrey Plaza) and Generva (Kate Micucci) find excitement by incessantly berating the groundskeeper. Alessandra (Alison Brie) is hoping to leave by way of arranged marriage. Father Tommasso (John C. Reilly) is filled more with sacramental wine than the Holy Spirit, while Mother Superior (Molly Shannon) attacks the issues of the cloister like a disinterested office manager.

Any shroud of purity is ripped away with the arrival of Massetto (Dave Franco). In cahoots with Tommosso, he takes on the job of handyman while pretending to be a deaf-mute in hopes of staving off the sisters’ verbal attacks. The strategy works a little too well, with the nuns taking turns throwing themselves at him and falling further into wickedness. ­

Baena’s matter-of-fact presentation makes the punches of immorality all the more raucous. And funny. The costumes and stacked stone abbeys transport us to a recognizable time and place where unnatural events take place. It’s a picturesque 1300s setting where nuns carrying baskets of laundry in front of verdant hills will stop to bully someone.

These setups feel episodic at first, especially in the jump from the convent to Massetto’s time in the realm of Lord Bruno (Nick Offerman). Thankfully, Offerman’s droning and the reactions of Lauren Weedman as his wife are enough to keep us interested. Paul Reiser is very funny in his one scene as Alessandra’s father, as is Fred Armisen as a bishop who’s low-key appalled at the sins he uncovers.

Plaza does a fine job of playing up her sardonic image, adding more anger than usual and shooting daggers that could pierce your soul. Micucci’s squeaky-voiced barbs exemplify the oddball tone and make her exaggerated, dark descent more hilariously jarring. Brie and Franco are an amiable mix of irrationality and charm. Everyone is well-cast, but Reilly and Shannon are perfect as the bumbling elders. They feel like exhausted, grown-up versions of their manic goofball personas, subdued and aloof in their absurdity.

There’s also a sweetness in the relationship between Father and Mother, and between the three nuns. However dysfunctional, their behavior is contextualized – often broadly and ridiculously – in Baena’s script, which prevents The Little Hours from becoming a monotonous string of indecency for the sake of cheap shocks. These eccentrics have heart, and spirited performances help bring it out amid the expletives and depravity. 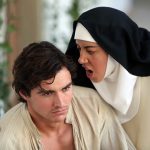 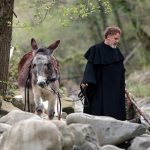 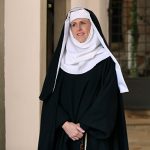 One thought on “The Little Hours”