No, this is really the last exorcism, we promise.
Buy It From Amazon
Buy It On DVD
Buy It On Blu-Ray

When it arrived in theaters back in 2010, The Last Exorcism was a highly touted “found footage” fright film dealing with the notion of demonic possession. It was seen as original in concept, gimmicky in execution (as are many current first person POV efforts), and worthy of horror geek consideration, thanks in no small part to the “produced by Eli Roth” branding that took place. In reality, the film was heavily flawed, playing a juvenile games of “is she or isn’t she” until the last few minutes which mindlessly ripped off Rosemary’s Baby. Now comes the money-mandated sequel The Last Exorcism Part II. Gone is the shaky-cam dynamic. Gone is the whole “devil inside” ideal, and gone is any reason to care or watch.

Late one night, a couple hears noises in their house. They find a feral Nell Sweetzer (Ashley Bell, again) hiding in their kitchen. After a short stay in the hospital, our heroine is sent to a New Orleans home for girls run by a man named Frank (Muse Watson). There, she meets her fellow females, including wanna-BFF Gwen (Julia Garner). After getting a job as a motel maid and making inroads into forgetting her past, Nell starts to feel normal. She even starts flirting with a boy named Chris (Spencer Treat Clark). But then odd things start happening: strange masked people stalk her; she hears weird voices coming out of the radio; her sleep is filled with incomplete nightmares. Apparently, whatever happened to Nell months before is back, and it won’t rest until it owns her completely.

Without the original’s artistic approach, without the mystery at its core and the reality TV revelations it promised, The Last Exorcism 2 is just a middling, mediocre horror movie. Granted, the original was no great shakes, but at least it leaned on the investigative reporter slant to its own benefit/detriment. Here, we have the same old hackneyed nonsense involving things that go bump in the night, unexplained paranormal phenomenon, and as a proposed twist, the possible end of the world. Co-writer/director Ed Gass-Donnelly’s concept of fear is built out of false scares, no real atmosphere, and an over-reliance on New Orleans as a backdrop. He seems to think that we will instantly get the heebie jeebies the minute we see some people dressed in Mardi Gras masks. Not quite.

As a result, Ms. Bell is required to carry the entire film and she just doesn’t have the talent to do so. Her slight stature and lack of any real depth means her Nell is a non-entity. Even when she’s cavorting on a table, supposed stricken with demonic rage, she’s merely agile, not frightened. And her scared mouse persona throughout the first half of the film is annoying. Said exasperation is equally matched by the rest of the cast, who seem to sleepwalk through their ill-defined roles. Even the whole “Order of the Right Hand” element seems tossed in out of left field, formulated to get the filmmaker and his dull as dishwater fright flick out of a K-hole of complete boredom.

Even when it tries to broaden its scope at the end, The Last Exorcism 2 argues for how slight and inconsequential the whole enterprise truly is. At the end of the day, this is really just a film about a naive backwoods country girl who becomes the Devil’s plaything, without any of the moral handwringing or religious fervor the subject would normal have. The first film had the whole feigned reality angle to keep us guessing. The second time around, there’s nothing to keep us invested. 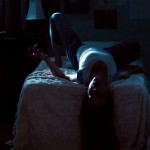 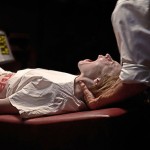 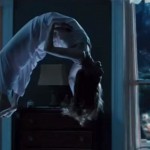