Just a little to the left.
Buy It From Amazon
Buy It On DVD
Buy It On Blu-Ray
Buy The Book

It’s finally here. After three years, three previous films, and billions in box office, The Hunger Games: Mockingjay Part 2 offers Katniss Everdeen (a still amazing Jennifer Lawrence) and her ragtag revolution actually bringing it to President Snow (Donald Sutherland) and the corrupt Capital in a way that should satisfy both fans of Suzanne Collins’ books and those who learned of this YA franchise from the first cinematic installment. Your mileage may vary, based on how emotionally connected you feel to the characters, but the overall effect is a surreal combination of terrific spectacle and slight dissatisfaction.

The latter comes from the basic, by-the-numbers plotting (which you can’t really blame the screenwriters for ). You can almost sense where things are going, individuals given their hero or heroine moments only to discover a more tragic course for their fate. The Capital is filled with booby trapped pods, as well as something akin to C.H.U.D.s (read: underground mutant monsters), meaning we’ll get a collection of excellent action sequences to pad out the wholly unnecessary running time. We’ll also get the mandatory manipulation of the love triangle, Katniss forced to find either Peeta (Josh Hutcherson) or Gale (Liam Hemsworth) the man she will make a bright new dystopia-free future with.

Still, we have to get through a lot of backstage intrigue first, with rebel President Alma Coin (Julianne Moore) starting to show some of her own warped ambitions, former Game legends Haymitch (Woody Harrelson) and Beetee (Jeffrey Wright) helping to control Panem, and equally adept victors Finnick (Sam Claflin) and Cressida (Natalie Dormer) working with our heroine to assassinate President Snow. There’s also Katniss’ sister Prim (Willow Shields) and a vow made movies ago, as well as a couple of surprises courtesy of former Gamesmaker Plutarch Heavensbee (the late Philip Seymour Hoffman) and Effie Trinket (Elizabeth Banks).

The smartest move The Hunger Games series ever made was dumping Gary Ross and his unnecessary gravitas for the far more adept-at-the-epic Francis Lawrence. While the first film is fine, the final three have built on each other in a way only a permanent fixture behind the lens could craft. It’s called long term vision, and though Lawrence still shows his struggles in certain areas (the “love” scenes), he gets this world and portrays it in a powerful way. When Katniss and the crew have to “play” the pods while raiding the Capital, there are magnificent edge of your seat moments. When dealing with the dynamics between the players, he’s a little less successful.

Collins’ source also suffers from what is clearly a lack of new ideas. Book one was about playing the game and overcoming obstacles. So was book two. Book three began as a pseudo-satire on how war and revolution can be propagandized and misdirected by either side… until it slips right back into playing a “game” and “overcoming obstacles.” Sure, it looks good, but somewhere along the line, The Hunger Games series lost what little social commentary or relevance it had and resorted back to its high concept, borrowed from Battle Royale premise. Collins, and the creative force here, know that subtext doesn’t sell tickets — huge oily waves washing down pristine future-shock streets with our heroes in its sights are what put (and keep) butts in the seats.

For that reason alone, Mockingjay Part 2 feels a bit more pat than the other installments. This is what we’ve been waiting for — the denouement, the betrayals, and the new alliances — and yet we are back watching preprogrammed threats attack quasi-adept “tributes.” This is a film that wants to go out with a bang and, on occasion, can only muster a thud. Still, when viewed in total, The Hunger Games is nothing if not a triumph. Thankfully, Mockingjay Part 2 only adds to the positives, instead of pulling the entire effort down with it. It’s a fitting end to a fascinating franchise. 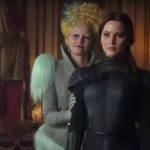 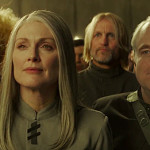 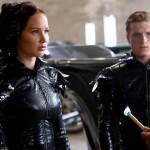