The Hateful Eight
By: Paul Brenner

The next Tarantino project: A remake of the musical PAINT YOUR WAGON
Buy It From Amazon
Buy It On DVD
Buy It On Blu-Ray

In Quentin Tarantino’s epic talkfest The Hateful Eight, Samuel L. Jackson encapsulates the ethos of the film: “Let’s slow it down. Let’s slow it way down.”

In this three-hour plus road show exhibition piece, Tarantino attempts to bring back the spectacular days of the 1960s, when true event films like How the West Was Won and The Wonderful World of the Brothers Grimm were shown in large single screen theaters. Tarantino, a true apostle of film and anti-DCP, in a praiseworthy albeit crazed and quixotic move, decided to shoot The Hateful Eight in Ultra Panavision 70MM, a format that hasn’t been utilized since 1966’s Khartoum. It’s an audacious but ultimately futile gesture, since after exhuming old 70MM projectors and lenses, the plan is only to show the film in this format over the Christmas holiday week and then, when it goes wide in January, it will be back to DCP. But one must honor the effort. Almost.

For one thing, like a true road show engagement, The Hateful Eight has an intermission and opening overture. But as someone who has actually seen widescreen roadshow films in the 1960s, it is a bit frustrating to see the lights go down as a title card announcing “Overture” is projected over the Ennio Morricone score. Back in the day, the overture was played while the house lights were still up and then dimmed when the credits began. This way it looks more like recreating the TCM experience in Ultra Panavision.

And for sheer perversity, Tarantino, rather than utilizing the Panavision format for impressive images and compositions, perversely uses it extensively in confined spaces (the interior of a stagecoach, the inside of a western general store) in the looniest use of widescreen since Sam Fuller used Cinemascope to shoot inside a submarine in Hell and High Water. Jackson’s glaring eyes and Jennifer Jason Leigh’s gore-soaked face come across impressively, much like the bridgework and nose jobs in the abysmal IMAX Les Miserables. These static locations coupled with Tarantino’s extended dialogue scenes make The Hateful Eight look like a filmed play, a souped-up, profane version of the early television series Studio One.

The first section plays like a cross between The Iceman Cometh and 3:10 to Yuma. A stagecoach carrying bounty hunter John Ruth (Kurt Russell) and his bounty, a thoroughly evil killer named Daisy Domerque (Jennifer Jason Leigh) is trying to make it to Red Rock and beat out an impending blizzard, so Ruth can claim his bounty and Daisy can be hanged. On the way, the stagecoach picks up another bounty hunter, the famous Marquis Warren (Jackson) and a racist ex-Confederate, Chris Mannix (Walton Goggins), also heading to Red Rock to become the new sheriff. But the blizzard increases in intensity and the coach is forced to take shelter at Minnie’s Haberdashery — Minnie mysteriously absent. In her absence, the place is run by Senor Bob (Demian Bichir) with a curious group already in residence – an old rebel general (Bruce Dern), a Ben Johnson-like cowboy (Michael Madsen), and an English fop (Tim Roth). But all is not as it seems and soon enough, all the characters are shouting at each other in Tarantino-laced diatribes, threatening violence while revealing hidden motives, intentions, and falsified pasts. This section of the film takes the later conversation-laden Howard Hawks westerns like Rio Bravo and El Dorado to their ultimate extreme. After intermission, all hell breaks loose and the audience is treated to not one but two slapstick-carnage-laden shootouts — Reservoir Dogs on the range.

Tarantino is an inspiring, passionate and exciting filmmaker with a genius for dialogue that is his and his alone. But in the case of The Hateful Eight, Tarantino has allowed genius to blind his eyes and run amuck. As Stella Stevens tells Jerry Lewis in The Nutty Professor, “I always say that to love yourself is the beginning of a life-long romance . . . and I know that you and you will be very happy together.” Tarantino needs to let the adulation comes from the audience and not his ego.

This is Tarantino’s eighth film and, sadly, it should be retitled The Hateful Eighth. (I’m sorry. I couldn’t resist.) 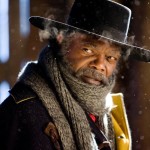 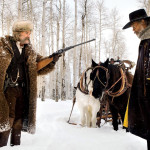 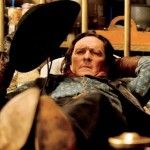