The Handmaiden
By: Blake Crane

No, no; it’s “Hand”maiden.
Buy It From Amazon
Buy It On DVD

At first, a period drama set in 1930s Korea during the Japanese occupation might seem incongruous with the rest of director Park Chank-wook’s filmography (Oldboy, Stoker).  But, as we learn early on in The Handmaiden, things aren’t always as they seem. Park masterfully peels the layers of the onion in this tale of treachery and sexual awakening, keeping us riveted and off-balance for the duration of the film’s two-and-a-half hours.

Sook-hee (Kim Tae-ri) is a pickpocket recruited by self-titled Count Fujiwara (Jung-woo Ha) to work a scam. The young woman will pose as handmaiden for Lady Hideko (Kim Min-hee) and convince her to marry the Count, who will promptly commit the Japanese heiress to an asylum and steal her fortune. In the way is Hideko’s autocratic uncle Kouzuki (Jin-woong Jo), a Korean who married into Japanese wealth and has spent his life acquiring rare books and developing an inflated sense of self-importance. In his massive library, he forces his niece to read erotic passages to a crowd of lecherous men in the hopes of selling counterfeited copies of the volumes. He also plans to marry her.

In adapting the novel Fingersmith by Sarah Waters, Park and his co-writer Chung Seo-kyung relocate the story from Victorian England, but keep its distinct three-part structure. All sections contain interesting, self-contained twists, and each new part twists the twists, offering new perspectives that tweak the narrative in glorious ways. None of the rug-pulling feels cheap in a “gotcha!” kind of way; instead, simple changes to points of view and deft filmmaking cues advance the story without completely rewriting what had come before. Everything happens as shown – Park is just careful as to what he shows, how it’s shown, and when he shows it. There’s one shot outside of a mental institution where one character is in the foreground, another framed out-of-focus behind them, and the understated reactions of both perfectly underscore the fluidity of the con.

Duplicity is a theme from the beginning, with each of the characters slathered in various coats of artifice. From the two swindlers, to Kouzuki’s phony nobility and Hideko’s suggestive readings, everyone’s a performer. The entire cast expertly adjusts subtle tics, expressions, and inflections to suggest moments where they’re in control or the one being controlled. Or better, when their characters think they’re in control.

The games take place largely in Kouzuki’s grand estate that’s a mixture of Japanese and English architectural styles, its Gothic halls and Zen gardens providing the perfect backdrop for this pulpy, screw-tightening long con. The setting pairs wonderfully with the unraveling of narrative. A romantic walk on the manicured grounds or the coldness of a sprawling mansion on a dark, windy night set certain expectations that are constantly being upended.

Ominous locales, like the library and whatever’s hidden beneath it, more overtly ramp up the suspense and pave the way for Park to delve into messy, bloody retribution that have been hallmarks of his previous films. The boldness here extends to a steamy sexual encounter between to the female leads. What makes it bold isn’t only its duration or graphic nature, but the undeniable passion involved. When sincerity is in short supply, the explicit representation is more affecting.

Expertly balancing the shifting story with the shocks and making them both meaningful, Park forms a beautiful-looking, uncomfortable-feeling symbiant circle. Underneath the deceit is a genuine interest in character arcs and developing significance in where they end up. Breaking free of the circle of deception and strife – whether it’s constraint from an authoritarian oppressor or the limitations of social class – is represented both gracefully and grievously. The craft in every scene and through every swerve is absolutely spellbinding. 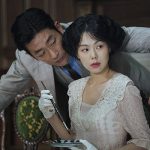 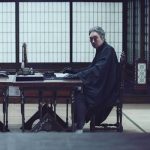 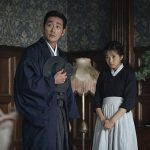