The Green Inferno
By: Bill Gibron

The Green Inferno is actually two movies. It’s two distinct ideas that don’t mesh well together, and as a result, detract from each other’s potential. One film focuses on the misadventures of a bunch of entitled college kids, their lack of life lessons requiring them to save some indigenous people from corporate ravagers determined to destroy their habitat. The other film is Cannibal Holocaust, or as close as director Eli Roth can come to that Italian splatter classic without actually remaking it.

As the blood and gore flow, as eyes are gouged out and guts are munched on, all the subtext slowly fades away. The promise of a pointed social commentary ends up washed out like so much human sluice in the Amazon river. Roth can make brutality effective. Hostel is perhaps one of the greatest modern horror films of all time. But The Green Inferno can’t decide if it wants to be meaningful or a massacre. By trying for both, it achieves little of either.

Our story begins in the states where a bunch of scripted victim fodder types kvetch over what’s happening to the rain forest. Justine (a decent Lorenza Izzo) has a father who works for the UN. She’s warm for the form of campus rebel Alejandro (Ariel Levy) and outraged that things like female circumcision still exist. Guess what will eventually happen to her? Anyway, Justine is taken in by the hunk’s humorless approach to the world, and agrees to join him on a trip to South America to save a backwards tribe. They gather a group. The plane crashes. People die while others are captured. Cannibalism ensues. The end.

Let’s get one thing straight right up front: Cannibal Holocaust is a classic. Sure, it’s vile, repulsive, horrific, and bleak, but it’s also a solid satire on the state of television circa the late ’70s. The whole premise revolves around whether to broadcast the found footage (where have we heard that before?) recovered when a documentary crew goes missing. What they discover is a descent into madness as the natives decide the filmmakers would make better eats than entertainment.

Roth has a similar subtext he’s working at — call it “white privilege with a touch of sensationalized schadenfreude” — but he doesn’t fully explore it. There are some laughs at the expense of the characters at the beginning, but everything is telegraphed. The doughy kid with a excess body fat? Wonder if he will make a tasty treat for the crazed natives. The notion that these people are “savages” is also discussed, imparting a bit of unnecessary racism to what it already a pretty cartoonish experience. The gore might have impact, but the blunt way color lines are drawn is more sickening.

Of course, we are supposed to be in on the joke, cheering along as one character combats explosive diarrhea, giggling as the cannibals cook a body choked with marijuana (the idea being that they will inhale the aroma, get high, and be vulnerable to an escape). In some surreal way, we are supposed to see Justine and her friends as warranting such atrocity because of their Caucasian cluelessness. Roth clearly wants it both ways. The movie he’s riffing on found nothing funny in what happened to the documentary crew. Here, Roth is being purposefully subversive and hopes you will smile. You won’t.

Instead, The Green Inferno becomes a chore, a hurry up and wait experience that barely delivers when the intended freak show begins. Deaths and other disgusting ideas frequently happen off screen. Instead of going full throttle on the repugnance, Roth pulls back. Back in the day, Italian auteur Ruggero Deodato was actually investigated for making what many considered to be a snuff film. Of course, it was all fake. No one will confuse The Green Inferno for being realistic. It’s too self aware to be anything other than strained. 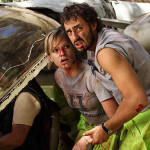 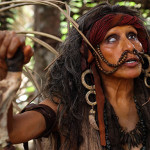 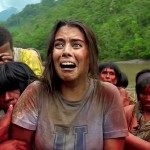 One thought on “The Green Inferno”