The Grandmaster
By: Bill Gibron

What is...The Matrix?
Buy It From Amazon
Buy It On DVD
Buy It On Blu-Ray

The Grandmaster is the tale of two movies. No, not Parts One and Two of one ambitious offering, but two (or in some ways, three) different versions of the same attempt by acclaimed director Kong Kar-wai to tell the life story of Ip Man, martial artist, master of the Wing Chun discipline, and eventual mentor to none other than Bruce Lee. While there has already been a series of films focusing on this man and his many accomplishments, this auteur still wanted to offer his perspective on the material.

Known for such ethereal and evocative efforts as Chungking Express, My Blueberry Nights, In the Mood for Love, and 2046, he struggled with the structure and pace. The original cut was nearly four hours long. He managed to bring it down to 130 minutes. For the Berlin Film Festival, it played at 122. Now, the man known as Harvey Scissorhands — Harvey Weinstein — has demanded further restructuring, turning the complicated plotting into something simpler, reducing the running time even further.

So depending on which version you see — the 130 original (available from distributors overseas) or the one being released in America (now a lean, mean 108 minutes) — you’re either getting the original vision or the results of Weinstein’s “challenge” to Wong. Having seen both, it’s safe to say that the differences are obvious, not necessarily off-putting, but in the end, more or less unnecessary. By requiring a new take for his U.S. market, Weinstein argues for an audience incapable of inference, of not caring about character but more for mind-bending kung fu action. By asking Wong to rework his movie, he removes some of its magic. Luckily, this is one filmmaker so talented that, even when he’s manipulated, he’s amazing.

The story begins in China. It’s the late 1930s. An old master (Wang Qingxiang) goes looking for someone he’s heard about, an amazing fighter named Ip Man (Tony Leung). Pitting him against several opponents, the traveler marvels at his style and sense of control. As a matter of fact, no one is a match for him except the aging individual’s daughter, Gong Er (Zhang Ziyi). Armed with her dad’s secrets, she defeats Ip in a showdown. They part ways. Just as he plans on leaving his hometown, Ip becomes embroiled in the Second Sino-Japanese War. After moving to Hong Kong, he tries to establish a school for martial arts. Rivals try to ruin his chances. He runs into Gong again and is amazed that she has given up on her father’s craft. The only thing on her mind is revenge. In the end, the two seem destined to be together until fate steps in and deals them a tragic blow.

The Grandmaster is an anomaly, like David Lynch helming Dune. It has all the outer aspects of a standard Shaw brothers exercise but it’s channeled through a challenging stylistic aesthetic that only Wong can work with. Yes, the fighting is handled deftly, from an opening confrontation in the pouring rain to Ip Man and Gong’s quasi-erotic beatdown, and there’s visual flair in fascinating abundance. But there is also a lot of standard storytelling and factual fudging. Wong, with the help of two other screenwriters, has overwhelmed Ip’s saga with fictitious characters and events, the better to transfer this national treasure into the realm of movie-making magic.

As for the differences in the cuts, they are intriguing in their purpose. As stated before, Weinstein seems convinced that Wong went overboard initially, demanding almost a half hour be snipped. Even further, there are new scenes added in place of others, the obvious intention being to clarify the conflicts and explain Ip’s importance. It’s like being spoon-fed a gourmet meal when you’d rather savor the selections in your own way. In the end, both films get their point across, with one being more artistic and ambitious than the other. No matter which side you’re on — Weinstein or Wong — The Grandmaster impresses. 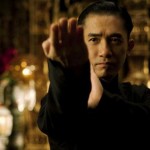 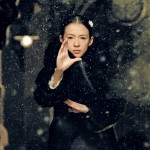 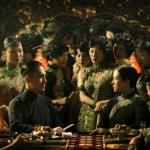