The Good Dinosaur
By: Bill Gibron

When Do We Meet The Flintstones?
Buy It From Amazon
Buy It On DVD
Buy It On Blu-Ray

For years now, the “P” in Pixar stood for perfect. Each one of its films, including the frequently dismissed A Bug’s Life, showed a studio that was willing to experiment with form and approach to create little animated jewels. Then Disney went from parent company to partner and suddenly you could see the House of Mouse’s influence over the studios output. Cars 2 was universally reviled while Monsters University proved that the sequel strategy (outside of Toy Story) wasn’t 100% working.

Redemption of a sort came with this summer’s Inside Out, a marvelous inspection of the inner world of pre-teen emotions and universal self-reflection. Now, a few months after that triumph comes the troubled The Good Dinosaur. Since it’s Pixar, it far surpasses the product put out by competing studios. But with nearly a decade of production problems and a messy behind-the-scenes struggle, we wind up with something that is a pleasure to look at, but far too familiar as a story to surpass the studio’s previous output.

The narrative centers on the title critter, a typical troublemaker named Arlo (voiced by Raymond Ochoa) who finds himself lost, separated from the rest of his Apatosaurus family. The dinosaurs never died in that purported asteroid collision with Earth and have continued to evolve alongside man. Dealing with a tragic event, Arlo befriends a caveboy who he names “Spot” (Jack Bright) who can only communicate in grunts and groans. Together, they try and find a way back to the Claw-Toothed Mountains while bridging the behavioral gaps between humans and beasts.

If historians want to show the difference between Pixar before and Pixar after, all they need to do is place The Good Dinosaur alongside something like A Bug’s Life to argue how far the technology has come. Gone are the hyper-realistic backdrops and occasional clunkiness. In its place are gorgeous vistas, believable glimpses of prehistoric nature, and a smoothness than can only come with time and tweaks to the computer-based programs that are the genre standard. But with Pixar, the pleasures also come from the story, and in this case, The Good Dinosaur lets us down.

It’s not just the whole “misfits vs. the misguided” dynamic that seems to punctuate this kind of film. It’s also not the over the top physical shtick that reminds one of lesser brands like Ice Age and Madagascar. The small ones in the audience will eat up each pratfall and prank, but there’s really not much more to The Good Dinosaur than great looking scenery spiced up with slapstick. The characters are basic, their motives equally simplistic, and the various plot twists are taken from other family friendly efforts. You can also see the delays here, the places where the movie might have gone had it now been consistently rewritten and reconfigured to fit a certain corporate standard.

In fact, that may be the new way to grade these titles — pre-Disney-fication and/or post. Inside Out was clearly pre. It plays like a singular vision given room to stretch and breath. The Good Dinosaur is post — a lot of post. It argues for something made by committee, taken apart, and rehashed hundreds of times to get that right commercial sheen the House of Mouse mandates. In the past, when Pixar did this, we got gems like Ratatouille and Toy Story 2. Here, the results are more like Brave — better than dozens of CG wannabes, but unable to stand with the brand’s best.

There is technically nothing wrong with The Good Dinosaur. It sets out to deliver a certain kind of story in a special manner and finds a mostly successful means of doing so. Go in with expectations higher than that and you’re bound to suffer from just passable Pixar. 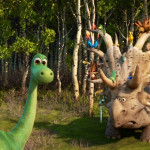 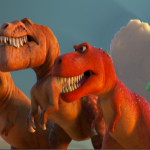 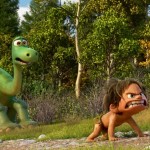 One thought on “The Good Dinosaur”