The Girl on the Train
By: Blake Crane

Should've taken the bus.
Buy It From Amazon
Buy It On DVD
Buy It On Blu-Ray
Buy The Book

Sure, they’re both based on page-turning potboilers that include a missing woman and have the word girl in the title, but there are several differences between the David Fincher’s Gone Girl and Tate Taylor’s The Girl on the Train. Most notably, Gone Girl is good.

In adapting Paula Hawkins’ novel, Taylor and screenwriter Erin Cressida Wilson focus completely on plot setup and resolution while the movie poses as insightful suburban thriller and psychosexual mystery. Lurid details are shown though they’re not impactful, trapped within a contrived structure in which the story is told through multiple characters with varying degrees of reliability. That’s a convenient way to attempt to mask various twists, though the movie is unsuccessful in doing so, and the assembly is too neat to make the shocks feel as dirty as they should. It also works much better in book form. Onscreen, much of the trash is taken out, replaced with narrative machinations, and all we get is table setting without the payoff of a juicy meal.

Semi-functional alcoholic Rachel Watson (Emily Blunt) commutes from the ‘burbs to Manhattan every day, paying particular attention to a couple of homes near one of the train stops. One of them used to be hers; now, her ex-husband Tom (Justin Theroux) shares it with new wife Anna (Rebecca Ferguson) and their infant daughter. Just down the road is a young couple, Scott (Luke Evans) and Megan Hipwell (Haley Bennett), on whom Rachel projects her fantasies of an idyllic marriage. She has an unhealthy affection for these strangers that cancels out her disdain for Anna.

One night in a vodka-induced haze Rachel leaves the train and wanders towards her former block. The next morning, she wakes with a bloody wound on her head and dirty hands with no memory of what happened. Panic from her blackout deepens when Detective Riley (Allison Janney) arrives at Rachel’s home and she learns that Megan Hipwell has gone missing.

Dark secrets within the dysfunctional quintet of lovers and former lovers are revealed as suspects are lined up for inspection, their personalities painted in broad strokes. Blunt and Bennett stand out in the group, each giving engaging performances that are lost in a mélange of procedural clichés and uninteresting visuals. Rachel’s often shown staring at, or through, her own reflection – as if to suggest some sort of obvious duality and/or need for personal inspection. Blunt somehow manages to be convincing in an angry drunken monologue delivered into a mirror and her boozy stare and slurred speech avoid typical drunk-acting corniness. Rachel comes off as credibly damaged. Bennett tells Megan’s tale with a vacant, longing sincerity that hints at past traumas and makes her sympathetic. However, instead of tragic figure the movie makes her feel like simple story necessity.

Also lacking distinction are Janney’s detective, who casually questions a suspect in a police station bathroom and seems generally disinterested in the case, and Megan’s therapist (Edgar Ramirez), who is used as a means for characters to reveal critical information at just the right time. Ditto for Lisa Kudrow, playing an acquaintance who hops on Rachel’s train to jumpstart the final act. Theroux and Evans are perfectly adequate as the sometimes pleasant, sometimes skeevy dudes.

Failing to capitalize on the confused, grief-stricken hysteria created by its terrific lead performer, The Girl on the Train never leaves us uncomfortable or eager to learn its secrets, but even if you’re half-paying attention you’ll be a step or two ahead of the hand-holding script. The film fails to hide the seams of its construction and there’s a marked scarcity of suspense because of it. The denouement provides closure to the story, but doesn’t articulate the lasting psychological scars. Apparently, the crippling effects of alcoholism and domestic violence are overcome through horrifying confrontation and hopeful narration. 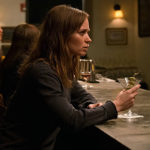 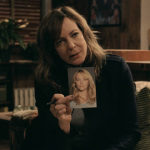 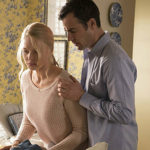